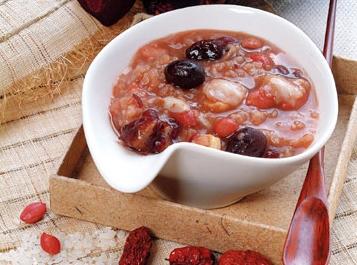 In China, December of the lunar calendar is called the La month, so the date of December 8th is also the Laba Festival. It is a traditional festival of China that is regarded as the preface of the Spring Festival.

In Chinese, Laba means 'gold eighth' which refers to the traditional start of celebrations for the Chinese New Year - the eighth day of the last lunar month.

On this day a special hot rice porridge, called Laba Zhou, is eaten, which contains glutinous rice, red beans, millet, Chinese sorghum, peas and some other ingredients, such as dried dates, chestnut meat, walnut meat, almond, peanut, dried lotus seeds etc. Midnight, on the previous night, people will begin to stew the porridge and make preparations. It won't let out an attractive smell until the next morning. The flavor varies from place to place, in the North, it is a dessert with sugar added; in the South, and the salt and seasonal vegetables are added.

This tradition has its roots in the Buddhist faith. It is said when Sakyamuni left home to strive for virtue, he fainted on the way because of hunger and exhaustion. A shepherdess passing by saved him and cooked porridge for him with glutinous rice and nuts. Then Sakyamuni sat under a bodhi tree in meditation and found Buddhism. As a result, the believers formed the habit of cooking Laba Zhou to commemorate it.

There is another interesting story about Laba Zhou. In the past there was a man who led a wasteful life. One winter, he eventually ran out of food. His neighbor gave him the grain he dumped before and cooked the porridge. Afterwards eating Laba Zhou became the way to teach children thrift in managing a household.

Another custom is to prepare Laba vinegar for Jiaozi on the New Year Eve. People will skin garlic and put them in the vinegar. It will have a distinctive flavor with time passing by.