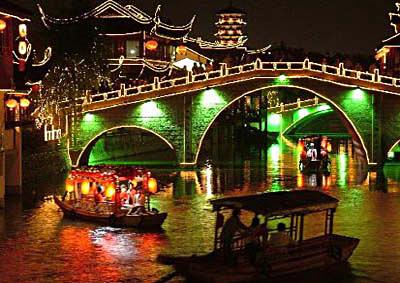 Ghost Festival has something to do with the sacrifice of Buddhism and took shape in Song Dynasty (960-1279). It is also a festival to worship ancestors and deceased relatives and show filial piety just as the Tomb-sweeping Festival. According to the Chinese saying, the souls of departed ancestors are released from Purgatory back to the earth for about one month in July. It is said that those ignored by relatives may do acts of mischief, therefore, people show their respect to souls of dead, also called ghosts with offering of Zhiqian (Chinese:纸钱, paper made to resemble money and burned as an offering to the dead), houses with furniture made of papers, joss sticks and food during the festival. Ghost are believed the dominator of events by people, so auspicious activities like weddings and business opening are not held during this period.