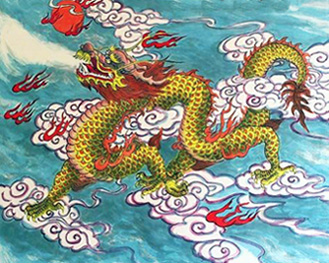 There are many activities to spend the Festival from Ming and Qing Dynasty in Shandong. The Yinlong and Datun customs are quite interesting: Yinlong (lead the dragon to home)-Fill the water storage with water after getting up and sprinkle waters to the front door, in order to lead and welcome the dragon home; Datun (make "granary"): Spread kitchen ash into several big circles in the yard and put cereals and grains in the middle.

A popular customs on this day is roasting beans. People roast the beans with sugar, sometimes they also roast melon seeds or make popcorns.

Many customs on this day are related to the dragon: some people put up their stonemills with the hope that good harvest can be achieved; some make steamed rice flour cakes; noodle and millet are food taboo on this day because the noodle is said to be the moustache of the dragon, and millet, the seed; activities including Dragon Lantern Dancing are held in some places.

In the past, Dragon-Raising-Head Festival was regarded as the end of the festivals the whole year. And people began to work and do farm works from this day. It is said it was also the birthday of the Earth God this day so the Earth God is worshiped in some places.