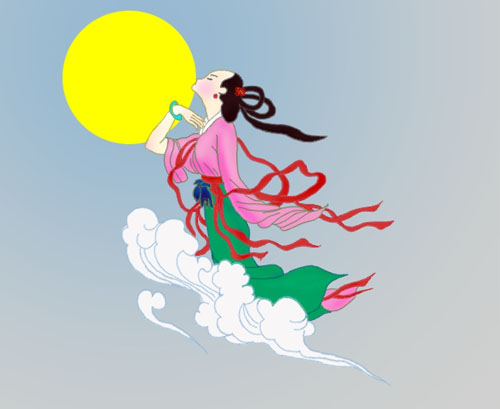 Mid-autumn Day (Chinese:中秋节), or Mid-autumn Festival, falls on the fifteenth day of the lunar August, the middle of the autumn, usually happens between the early September to early October in western calendar. Mid-autumn Day is a big traditional festival just second to Spring Festival and is celebrated world wide among Chinese. It is also a reunion festival related to the moon and the beautiful legend of Chang E (Chinese:嫦娥), a beauty lives in the moon.

The legend of Chang E can be traced back to the ancient time of Xia Dynasty (2000BC – 1600BC). According to the story, the husband of Chang E, Houyi (Chinese:后羿) was rewarded with the elixir of life for his shooting of nine suns which have saved the life of people in the earth. In a moment of desperation when fighting with an elixir stealer, Chang E eats the elixir and then flies to the moon. Because she doesn’t have the heart to leave her husband, she finally stops on the moon and lives there accompanied by a rabbit. It is said that at the night of Mid-autumn day, people can see the Chang E dancing and playing with her rabbit on the moon.

On the basis of the Chinese lunar calendar, it is always a full moon in the middle of a lunar month, especially on the fifteenth and sixteenth days. And it is interesting that on almost every Mid-autumn Day, the weather is fine that a beautiful full moon can be enjoyed at night.

Sons and daughters works far away will back home on Mid-autumn Day to spend the time with the family. After reunion dinner, the family will get together out of doors, to enjoy the beautiful moon and share many seasonal fruits and delicious food, and of course, the traditional moon cakes (Chinese:月饼). Moon cake is a stable dessert during the Mid-autumn Festival with various flavors, and the most popularized fillings are egg yolk, lotus paste and red bean paste, besides, there are also kinds of fruit jams, pork, beef, nuts, coconuts, walnuts, dates, chocolates, ice cream, etc.