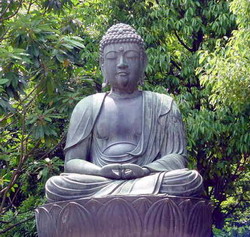 Buddhism was created by Siddhartha Gautama or Sakyamuni (means a wise man of the clan), the prince of Shakya (present-day Nepal) between the 6th and 5th centuries BC. Sakyamuni has given up the royal life and meditated under the pipal tree and later became Buddha and founded the Buddhism.

According to the records, Buddhism was officially introduced into China in Eastern Han Dynasty in 67 AD, which is a great event in the development of Chinese culture. As a religious practice as well as a system of thoughts, Buddhism greatly enriched the Chinese philosophy, literature and art and influenced the minds and characters of the Chinese people. Today, about 200,000 Buddhist monks and nuns with over 13000 Buddhist temples in China, and Mahayana, Tibetan Buddhism (one of the Mahayana) and Theravada (mainly in Yunnan province) are the three kinds.

The History of Buddhism in China
Buddhism was introduced in China to the reign inhabited by Han people. During the reign of Emperor Aidi of the Western Han Dynasty in 2 BC, an envoy named Yin Cun from India imparted Buddhist sutras to a Chinese scholar Jing Lu. Later, the Emperor Mingdi (57-75) of the Eastern Han Dynasty sent a mission to the western regions for Buddhist scriptures and built the first Buddhist temple of China in luoyang, the famous White Horse Temple.

In Wei and Jin dynasties (220-420), Buddhism spread widely, and during the Southern and Northern dynasties (420-589), the government further developed the Buddhism by building temples, monasteries and grottoes, translating Buddhist sutras, and many famous monks, scholars and teacher emerged. By the Sui and Tang dynasties (581-907), Buddhism reached its heyday that different sects of Buddhism had been formed. Over a long period, Buddhism gradually took root in the feudal society of Chinese and made a notable impact on Chinese philosophy, literature and art.

Famous Buddhist Monk and Its Story
There are some famous Buddhist monks in the Chinese history, namely, Fa Xian in Eastern Jin Dynasty (316-420), Xuan Zang and Jian Zhen in Tang Dynasty (618-907), of which the special important is Xian Zang, who was a Buddhist scholar. In 627, he departed from Chang’an (present-day Xi’an) to India for Buddhism study; he has gone through Gansu, Xinjiang and central Asia and undergone many hardships all the way. For 15 years in India, he visited many famous temples and studied Buddhist classics and doctrines. After returning to Chang’an, he translated 75 Buddhist scriptures (1335 volumes) into Chinese and wrote an account of his trip, the Records of Western Travels which is a valuable reference for researches of history and geography of Ancient India, Nepal and Pakistan, and Central Asia.

The novel “Journey to the West” is a mythological story of Xuan Zang’s trip to India, describing a series of adventures on his pilgrimage to the West Region. In the novel, he is accompanied by four mythological figures of whom the most important is Sun Wukong (the Monkey King), the real hero in the novel, who outwits various ghosts and monsters with strong magic power.

The Doctrines and Symbols of Buddhism
In general, there are three points of Buddhist doctrines, the world is impermanent and will be destroyed eventually; everything in the world is unreal; and the ultimate aim of an individual’s life is eternal tranquility.

The Four Noble Truths, very psychological, are common properties of all schools of Buddhist thoughts, saying, life is inevitably full of sorrow, sorrow comes from craving, sorrow can only be stopped by the stopping of craving, and this can only be done by a course of a carefully disciplined and moral life, the life of concentration and meditation led by the Buddhist monks.

There are nine symbols in Buddhism, namely, pagoda, dharma-cakra, lotus, a ring of light around the Buddha and Bodhisattva, a auspicious sign, prayer beads, pipal tree, mandala and six-colored flag.