Built in the year of 537, the Temple of Six Banyan Trees is one of famous historical sites in Guangzhou. The temple first got famed for the inscription of Su Dongpo, a famous Northern Song Dynasty (960-1127) poet and literature scholars. With towering pagoda, dense trees and a number of historical relics, the temple is one of four Buddhist temples in Guangzhou and other three are Guangxiao Temple, Hualin Temple, and Haizhuang Temple. Temple of Six Banyan Trees features the imposing pagoda, known as Six Banyan Pagoda and Flowery Pagoda. In 1997, the temple was selected as one of ten tourist attractions of Guangzhou. 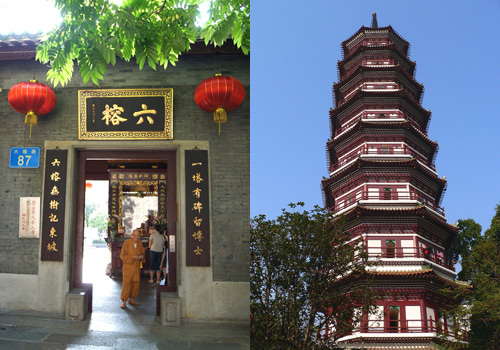 The temple’s history goes back to 1400 years ago. During the Northern and Southern Dynasties period (420-589), a Buddhist priest was appointed to Cambodia by Emperor Wu of Liang State in seek of Buddhist relics. After his returning to Guangzhou, the temple was built and called Zhuangyan (Solemn) Temple. The temple has been renovated for several times. And its name was changed from Zhuangyan Temple, Longevity Temple, Jinhui Temple, to Temple of Six Banyan Trees (Liurong Temple). The present name was given by Su Dongpo, who was exiled to Guangzhou and invited by the abbot to rename the temple. Inspired by the six luxuriant banyan trees (can't be seen today) in the temple, he joyfully wrote down the name instantly. The inscription now can be seen hanging above the temple gate. 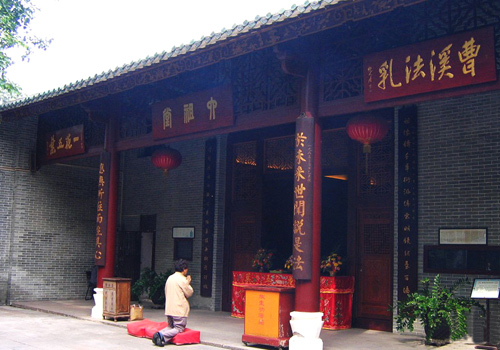 The temple complex includes the mountain gate, Flowery Pagoda (Six Banyan Pagoda), Daxiong Baodian (main hall), Hall of Avalokitesvara, Hall of Six Buddhism Patriarchs, Sutra Depository, graveyards of patriarchs, etc. There are a number of relics, such as Flowery Pagoda, bronze statues of Buddha, Avalokitesvara, Huineng (the sixth patriarch of Zen Buddhism), tablets of Wang Bo (a famous poet in early Tang Dynasty (618-907)), portraits of Avalokitesvara from many famous artists, and so forth.

The most eye-catching part of Temple of Six Banyan Trees is the Flowery Pagoda. Designed in an octagonal shape, the pagoda stands totally 57.6 meters high. The pagoda seemingly contains nine storeys but actually contains 17. Standing on the top floor, visitors can have a panoramic view of Guangzhou. Figures of Buddha are carved on pillars. The roof and eaves are covered with glazed tiles. Bathed in sunshine, the pagoda shines like nine flowers, looking beautiful. The bronze statue of Huineng stands 1.8 meters high and weighs one ton on the hall of Six Buddhism Patriarchs.