Located southwest of Sichuan Province, Emeishan City, which shares a same name (峨眉山) with the famous Emeishan Mountain (Emei Mountain or Mount Emei) in Mandarin Chinese, is situated 130 kilometers southwest of the capital city of Chengdu. The Emei Mountain situated in the Emeishan City is renowned for its rank as the highest of the Four Sacred Buddhist Mountains of China (3,099 metres high) and its nomination as a UNESCO World Heritage Site together with the Leshan Giant Buddha since 1996. Travelers looking for some marvelous hikes will just be satisfied with the landscapes displayed there especially during the sunrise and clouds sea sightseeing, available from the Golden Summit of the mountain. Home to many Tibetan macaques (monkeys), the scenery in Emei Mountain is just a delight that everyone will enjoy during the climbing. More than a sacred place, Emeishan is also a pure natural beauty attracting hordes of pilgrims and tourists every day. While facing the Emeishan, travelers are impressed by the 76 Buddhist Monasteries located throughout the paths and strangely adapting their architecture to the landscape. On foot or taking cable cars, climbing the Emei Mountain is a worth visiting highlight of the Sichuan Province that will let travelers walk on the definitely most famous sacred mountain of China!

History of Emeishan – From Taoism to Buddhism: a sacred mountain for Chinese population 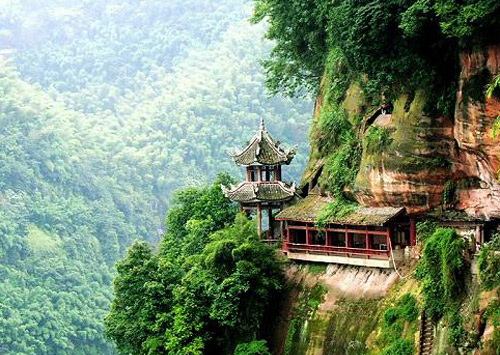 The Emeishan has a long history tracing back to about 10,000 years ago. Already inhabited at this period of time, the Emeishan was originally a Taoist retreat converted to Buddhism by the 3rd century AD. Namely, the Puguang Hall located on the Golden Summit of the mountain is said to have been built in the 1st century AD by the patron Bodhisattva of Emei: Puxian (普贤菩萨), also known as "Samantabhadra". Little later on, the Puxian Temple (Wannian Temple) was erected at the foot of the Guanxinpo Terraces by the Chinese monk Huichi to honor the enlightenned-being that was Puxian. This is after the mid-9th century that Emeishan started to enjoy a great fame. After a Buddhist mission to India under Emperor Zhao Kuangyin of Song Dynasty, Buddhist texts and relics were brought back and were the object of translations after the building of temples on the sides of Emeishan. As the place of martial arts practices such as the Kung Fu during the 16th and 17th centuries, Emeishan is sometimes assimilated to the Shaolin Monastery. This literally "high and lofty mountain" has since ever been the center of many worships and prayers ranking it as a sacred mountain. Intertwining gorgeous historical and religious sites as well as an amazing lush natural scenery, Emeishan has been ranked as a UNESCO World Heritage Site since 1996 with the Leshan Giant Buddha facing it. 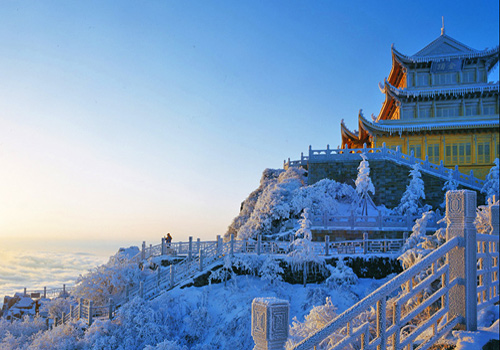 The sacred Emeishan is definitely a great highlight of the Sichuan Province. Together with the Leshan Giant Buddha from where Mount Emei can be seen, the site is just a marvel of large-scale masterpieces and worship of the Buddhism faith. Travelers looking for some meaningful hikes would just be delighted by Emeishan's beauty. Place of many buddhist temples, monks and pilgrims, this UNESCO ranked mountain will just fill your curiosity. While climbing the mountain, you may be followed or stopped by some cute little monkeys (Tibetan Macaques) that may look for some nuts sold by merchants there. A tour to this southern Province of China is also the occasion to taste some typical and worldly known Sichuan cuisine as well as to encounter local people. Well deserved by the nearby capital of Chengdu, the area of Leshan and Emeishan is in every way the center of many interests for years now. Rich by nature, historical sites, cultural relics, etcs... China is displaying another time it's uniqueness to you!