Bao Guo Temple, the largest temple at Emei Mountain, is the doorway to the mountain as well as the center of Buddhist activity of Emei Mountain. The temple faces the Phoenix Lake and backs onto the Phoenix Plains; it welcomes the sun-rise each morning and is the last place to see sun-set at dusk.

The temple was constructed on the right side of Crouching Tiger Temple in Ming Dynasty and was originally named the Hui Zong Hall, with an intension of gathering Confucianism, Buddhism and Taoist.  In early Qing Dynasty, the Hui Zong Hall was moved to the actual residence and rebuilt. In 1703, the name was changed to "Bao Guo" which literally translates as "serve the nation".

The temple holds several remarkable and religiously significant religious artifacts; keys among them are a huge porcelain Buddha that sits in the main hall, a 7-meter-high 14-storey "Hua Yan Tower" that makes of red copper (moved to Crouching Tiger Temple already) and a 25-ton 3-meter-high copper bell.

In the temple there are five halls: the Gate, the Maitreya Hall, the Mahavira hall, the Seven Buddhist Hall and the Samantabhadra Hall. They are the most important and well visited ones.

The entrance of the temple is spectacular consisting of three pack of type roofing and centered around the large plaque on which Emperor Kangxi of Qing Dynasty wrote "Bao Guo Temple" in large brush-written Chinese characters. 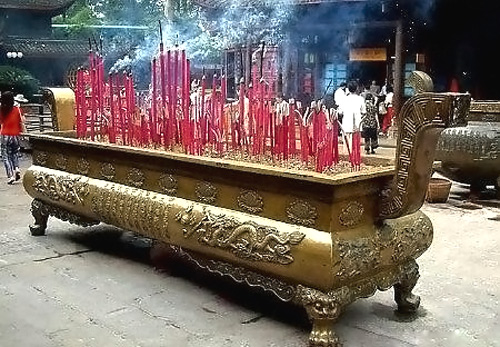 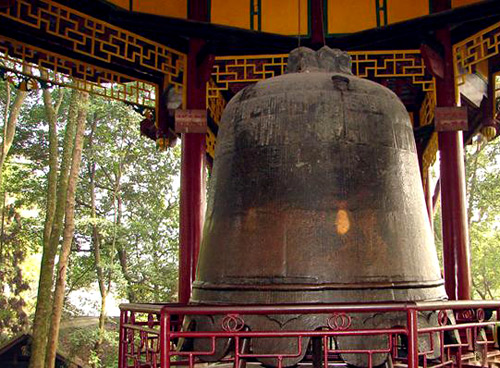 The first hall Maitreya Hall is filled with colored clay figure of Buddha Maitreya. The second one Sakyamuni Hall is the temple's main hall filled with delicate artifacts; this is where the large golden Buddha Sakyamuni rests on his lotus-shaped throne, with figures of the eighteen disciples of the Buddha on the left and right wing-rooms. The third one Seven Buddhas Hall concentrates on the seven Buddhas, on the both sides wall has the Song Dynasty renowned writer, calligrapher Huang Tingjian's four "Seven Buddha Brave" can be seen painted on a large wooden plaque. The fourth hall Samantabhadra Hall is the home of Buddhist scriptures where valued painting works of Zheng Banqiao, Kang Youwei, Zhang Daqian, Xu Beihong and some other famous Chinese artists. In recent years, a new statue of Samantabhadra Riding on White Elephant, which lies on a bed of lotus flowers, has also been set inside.

Furthermore, apart from Buddhist scriptures, calligraphy, artifacts, specimen of some living beings and the model of the whole Emei Mountain, there is a thriving and unique natural ecosystem surrounding the temple as well as the beauty scenery from Mount Emei itself.

The grounds of the temple are filled with small bamboo groves that are there to be explored in perfect tranquility; butterflies and bees are attracted to the temple as if they seemingly can sense it is a place of natural balance and growth. The thick aroma of incense fills every corner of the grounds and temple itself, many of large congregations of Buddhists are held here. 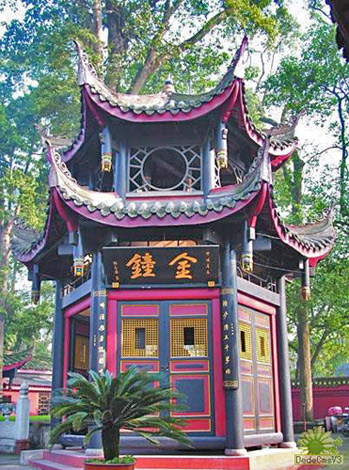 Getting there
Catch the No. 5 bus in Emeishan City to Bao Guo Temple, it costs Y1.5 and there is a bus every 10 minutes.

Food
The temple provides authentic Buddhist vegetarian meals; breakfast is served between 7:00-7:30, lunch between 11:00-11:30 and dinner between 18:00-18:30. The food is reasonable priced but in the accordance with Buddhist principles it is important travelers understand that all food is to be consumed, waste is considered disrespectful.

Accommodation
There is ample accommodation located near and around the temple, including a star-rating hotel that includes a natural hot spring, budget or family accommodation is also available, residence within the grounds itself is also offered.