Chinese name: 飞来寺 (Fei Lai Si)
Location: at the roadside of Yunan-Tibet Highway, 8 kilometers from county seat of Deqin County, Diqing (Shangri-la) Tibetan Autonomous Prefecture, Yunnan Province. Opening time: 08:00-17:00 Ticket: CNY10 Recommended time for a visit: 3-4 hours. Best time for visit: in winter and spring from January to May. How to get to Feilai Temple: - take buses departing for Mingyong Village or Xidang Village, and get off at Feilai Temple (about 20 minutes); - charter a minibus with about CNY50.
Accommodation: in the vicinity of Feilai Temple, there are some hostels for choice. Food: all the hostels provide food for their guests; other several snack bars nearby provide food in inexpensive price.

Feilai Temple was originally built in 1614 during Ming Dynasty (1368-1644) with a history of 385 years. Covering 1500 square meters, it was built according to the mountain terrain with architecture at random discretion. The whole temple is consists of Zisun (Descendants) Hall, the Hall of God, Haichao (Sea Tide Hall), Liangxiang (Wing-rooms) Hall, Liang’er (Two Ears) Hall, and Sipei (Side) Hall. The temple is a combination of three religions- Buddhism, Taoism, and Confucianism.

Directly facing the Kawakarpo Peak, Feilai Temple is famous for its viewing deck for amazing scenes of the magnificent Meili Snow Mountain. 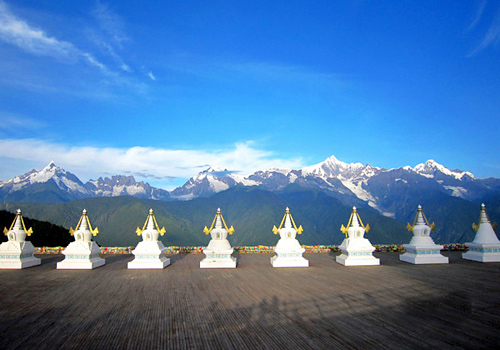 In the front of the pool in Feilai Temple, there is a spring, which is said with satisfied efficacy for retaining youthful looks and keeping longevity by Chinese. It was believed to be the reason why most abbots of the temple lived long. Therefore, many visitors drink some spring water when they come to the temple and even take home some bottles of the water for their family.

The architecture features are quite distinctive in Feilai Temple. What is the most remarkable is the carving art in Haichao Hall- the main hall of the temple. The hall is the style of single eave and suspended top in girder structure. The peripheral columns are erected on a large base, which was carved with delicate figures, flowers and other decorated patterns. Window lattices are also caved with exquisite patterns. Entering into the hall, there are too many things to see. The ingenious craftsman chiseled the main carvings of the hall on the mountain stones- the Haichao Gragon King have his daughter marry with a guy. In the left of the carving are eighteen arhats, or eighteen disciplines of the Buddha; while in the right are ingenious and life-like carvings of the plots from famous literature masterpiece- the Pilgrimage to the West. 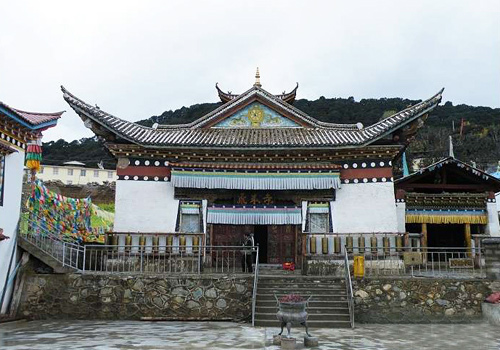 Origin of the temple name- a legendary story

The legend goes like this, the original selected building site for the temple was 2 kilometers away from the present one. All materials had been prepared and piled up on the site. However, the night before the formal construction, main building materials, like pillars and girders were disappeared without any trace. Later, monks found them erecting on the present site in regular; they believed it was arranged by the Buddha, so they changed the site and named the temple as Flying Temple.