The Three Pagodas of Chongsheng Temple


Chinese name: 崇圣寺三塔 (Chongsheng Si Santa)
Location: at the foot of Yingle Peak of Mt. Cangshan, some 2 km northwest of the Ancient City of Dali, 14 km from Xiaguan, Dali, Yunnan Province.
Opening time: 08:00-19:00.
Ticket: CNY121.
How to get there: if depart from the Ancient City of Dali, it is convenient by foot (only 2 km and takes only 30 minutes), or take special tourist lines.
Best time for visit: in March and April because most of the ethnic festivals of local Bai minority happen in these two months, in addition, March and April is also the season with most pleasant climate in Dali.

Introduction to the Three Pagodas of Chongsheng Temple

Seated with the back against Mt.Cangshan, and facing the Erhai Lake in the front, the Three Pagodas of Chongsheng Temple of Dali constitutes a situation of tripartite confrontation with a large pagoda and two small ones. As one of the oldest and most magnificent architectures standing gracefully and forcefully in South China, it is a famed place of interest, a symbol of ancient history and culture of Yunnan Province. Built amid previous Chongsheng Temple by Nanzhao Kingdom, a local regime of Tang Dynasty (618-907), the three pagodas was named after the temple. Though the temple was damaged in Qing Dynasty (1644-1911), the three pagodas were reserved after numerous natural disasters and manmade incidents. The Three Pagodas of Chongsheng Temple was designated as an important heritage site protected under the state in 1961 and inscribed as AAAAA grade scenic area in 2011. 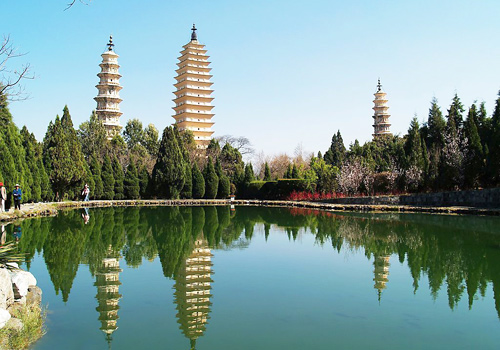 History around the Chongsheng Temple and the Three Pagodas

The Three Pagodas of Chongsheng Temple was originally built during the rein of Emperor Quan Fengyou of Nanzhao Kingdom (824-859). The large pagoda, called Qianxun Pagoda (千寻塔), was first built into a 16-storey one with a height of 69.13 m; the smaller northern pagoda and the southern one were built both in octagonal with 10 storeys and a height of 42.19 m. It is said that the three pagodas was constructed for the reasons of advocating Buddhism as well as dominating riddled floods in the area (according to local Buddhism culture, Buddhist pagoda can dominate beasts who control natural things such as flood). After the completion of the three imposing pagodas, a grand Chongsheng Temple was constructed later; and for several expansions in later periods, the temple reached its heyday in Song Dynasty (970-1279). 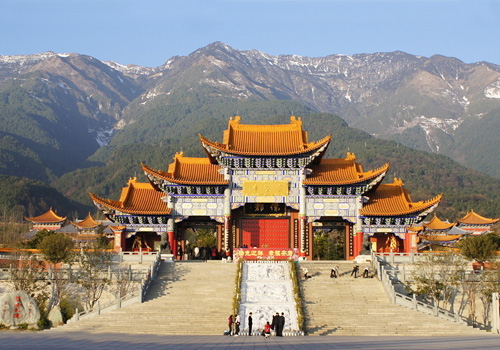 According to historic records, the Chongsheng Temple and the Three Pagodas had been already a holy Buddhism site and an imperial temple in Tang Dynasty for both The Kingdom of Dali and its neighboring Southeast Asia countries. In 802, the king of Pyu Kingdom (in present Burma) and his prince worshipped Buddhas in Chongsheng Temple and the Three Pagodas; in 1056, the king of present Tailand had two visits to the Temple. As Buddhism prevailed greatly at that time, among the 22 kings of the Kingdom of Dali, there were 9 became monks in Chongsheng Temple, which is a peculiar phenomenon in the world history of Buddism.

Cultural significance of the Three Pagodas of Chongsheng Temple

The bricks of the Three Pagodas of Chongsheng Temple are distinctive from that of other pagodas. Kinds of Buddhism incantations in Sanskrit or Chinese are dotted on bricks when the pagodas were built, which are precious materials for researches of the building history of the Three Pagodas, the Buddhism history in Dali, and the relationships between Buddhism of Dali & Nanzhao and Buddhism of Central Plains of ancient China.

During the maintenance of the Three Pagodas in 1977, more than 600 cultural relics were sorted out at the top and the base of the Qianxun pagoda. These relics includes Buddha statues of periods of Nanzhao Kingdom and the Kingdom of Dali (local regimes of ancient China), hand-copied Buddhist sutras, copper sheets with words, kinds of bronze mirrors and medicines, such as cinnabar, sanders, cartilaginous, corals, micas, etc. of which there is a golden statue which is 1135 g in weight and 0.24 m in height. This batch of relics is the most important and richest that has been found so far to the benefit of the historical research of kingdoms of Nanzhao and Dali.

Architecture Features of the Three Pagodas

The Three Pagodas of Chongsheng Temple is imposing in primitive ethnic flavor, which consists of a king one in the middle, named Qianxun Pagoda, and two smaller ones on two sides, both are 70 m away from each other. The interior of the pagoda is equipped with a wooden staircase, by which the top is accessible, where an amazing overview of the Ancient City of Dali can be found. 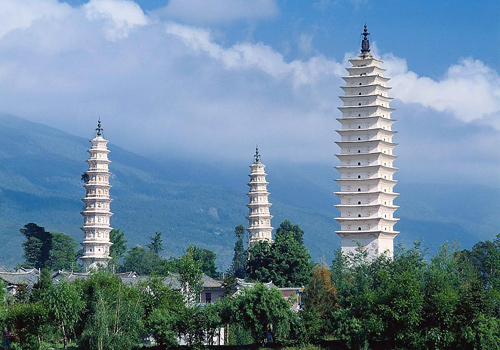 The king-pagoda is 69.13 m high and 9.9 m wide measured by the base. Similar to the Big Wild Goose Pagoda in Xi’an in appearance, it is a square hollow pagoda with dense eaves. A typical style of Tang Dynasty (618-907), it is the existing highest pagoda in China. The first storey is the highest one among the 16 storeys of the pagoda with a height of 13.45 m; the second and successive 13 storeys are essentially the same in both structure and size, and the top storey is just a typical tower top.

The two smaller pagodas were built with the same shape with 10 storeys and a height of 42.4 m. They are octagon hollow pagoda with dense eaves, and decorated into attic style in appearance. At the top of the towers are gorgeous gold plating pagoda roofs.

The Three pagodas Park, also called Reflection Park of the Three Pagodas, was built in 1980s, covering a land area of 180 acres and a water area of over 60 acres. It got its name from the graceful clear reflections on the water of the Three Pagodas of Chongsheng Temple. The authentic Three Pagodas and the reflections create a terrific picture together, which has been a famous tourist shoot site, a symbol of natural beauty as well as cultural landscape of Dali, and a popular background on numerous magazines, stamps and postcards. 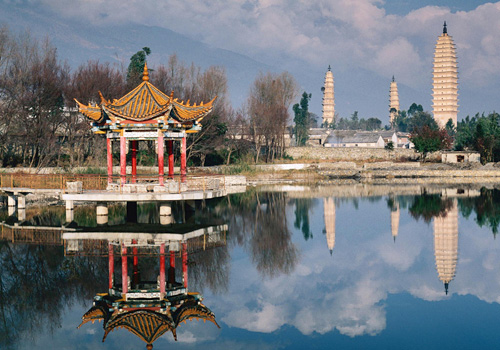 In the west side of the pool, there is a stele pavilion in a height of about 5 m; through the pavilion and a corridor aside, a Yangbo Pavilion amidst the pool is accessible. In the south of the Yangbo Pavilion, it is an islet with a pair of vivid white cranes, which also offer beautiful reflections on the water. In the southwest, there is garden in the park with rich exotic flowers and herbs, such as camellia, azalea; paths are paved with marbles and guided by green plants on both sides.

To reproduce the ancient view that pagodas and the temple are shining together, a new Chongsheng Temple was reconstructed in April, 2005 around the Three Pagodas. Occupying 40 hectares, the temple is a modeled ancient architecture complex which is designed according to three axes, with the essence of all characteristics of past dynasties from Tang Dynasty to Qing Dynasty.