Chinese name: 苍山 (Cang Shan)
Location: in northwest of the Ancient City of Dali, and the cable car station is in the west of the March Fair, Yunnan Province.
Opening time: 09:00-18:00.
Ticket: CNY30 (additional CNY90 for a round-way cable car to the mountain).
How to get to Mt. Cangshan: by foot (only 1 km from the Ancient City of Dali to the cable car station) or by taxi.
Nearby attractions: Erhai Lake, Butterfly Spring.

As the main mountain in the south of Yunling mountain chain, Mt. Cangshan consists of 19 peaks starting from the Dengchuan in the north and ending at Tiansheng Bridge in the south. The 19 peaks are all high over 3500 m above the sea level, 7 of which over 4000 m and the highest peak, named Malong Peak has an altitude of 4122 m. Between every two peaks of Cangshan Mountain, there is a stream flying down and flowing into the Erhai Lake. The grandeur and lofty of Mt. Cangshan makes a sharp contrast landscape with the graceful Erhai Lake. 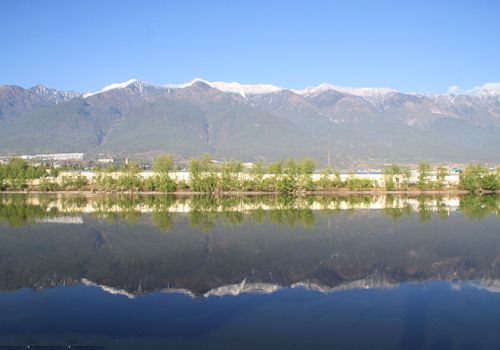 Due to the high altitude, it is extremely cold on the top of Cangshan Mountain and the summit is spectacular with covered snow all the year round, particularly when it is glistening under the sunshine. Though abounding in lavish greens in midsummer on the mountainside, the peak point of Mt. Cangshan is still encompassed with white snow. The Mt. Cangshan Snow is the first to be mentioned among the Four Greatest Scenes of Dali; its beauty and glory have gained numerous eulogized words offered by literati of both ancient and modern times.

Main attractions in the scenic spot of Mt. Cangshan

The clouds around Mt. Cangshan peaks are noted for irregular changes in a day and offer diverse marvelous views. The most famed are Wangfu Cloud (Waiting-husband Cloud) and Yudai Cloud (Jade Belt Cloud). The first is relevant to a love story between a princess and a hunter; it often emerges around the Yuju Peak in winter or spring, which plays an important part in local as a sign for fierce gale and terrifying waves on Erhai Lake that fishing boats will not go to sea. The Yudai Cloud is charming and lovely; it is also an omen for a good harvest to local Bai People; it often emerges after rains and looks like a milk-white jade belt gracefully twisting the Cangshan Mountain. 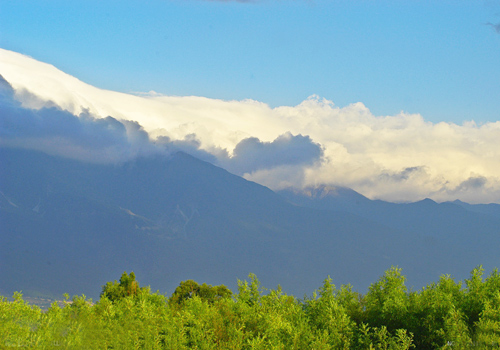 The 19 peaks of Mt. Cangshan stretch in a long ridge, just looks like an unceasingly flying dragon. They are toweringly connecting with the blue sky, erecting as painted screen which divides itself into two entirely different styles in the east and west. Walking in the fragrant trees and blooming flowers is just like walking in a fairyland. Various local featured floristics in the mountain make it a huge forest park; in total, there are over 6000 species plants in Cangshan Mountain; there are swaying broad-leaved forest, big and tall firs, and millions of azaleas, which are the season’s symbol and in great varieties, such as fiery-red Rhododendron simsli, snow-white Rhododendron decorum, cream-yellow Rhododendron molle, boldly Rhododendron russatum, and inaccessible Rhododendron redowskianum on the high branches.

Butterfly Spring is renowned for its terrific scenic beauties as well as the wonder with thousands of butterflies around in spring, particularly during the Butterfly Festival on every lunar April 15th. All kinds of flourishing flowers, trees with quietly elegant fragrance, and thousands of colorful butterflies in diverse species and sizes compose a superb scene attracting admirers from home and abroad.

Between every two peaks of the Mt. Cangshan, there is a stream flying down and joining each other to the Erhai Lake. If the colorful flowers are the emotions of Mountain Cangshan, then the water amidst verdant forests and flowers is the soul of the mountain. The streams of Mt. Cangshan are clear and cool, while pools and ponds are graceful and elegant. 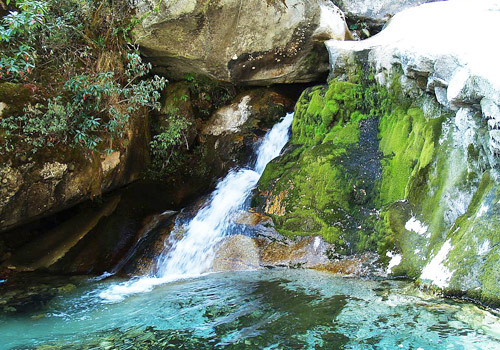 Qingbi stream, literally Clear and Green Stream, is worthy of the name. There is a popular saying among locals, one do not want to enjoy the beauty of other waters after a visit to Qingbi Stream. The Qingbi stream is just the example of all Dali waters. Flowing between Malong Peak and Shengying Peak, the Qingbi Stream looks like a playing dragon happily flying down from the lofty cliff and then crossing gorges and brooks. The water is crystal clear and cobble stones in it are beautiful and visible.

Located at the junction of Yuju Peak and Longquan Peak, Xima Pond is deemed as “a lake over the mountains with a 3920 m height above the sea level. Among all ponds and pools on Cangshan Mountain, Xima Pond is the most famous for both high altitude and pure water quality with superexcellent scenery. According to legend, Kublai Khan (the emperor who founded Yuan Dynasty (1271-1368)) once stationed here when his troops arrive in Dali and had his horse wash on the pond, that is why the pond was so named as Xima Pond (Horse Washing pond). Around the pond are thick azaleas and thick bushwood that the pond is gorgeous blazing with colors during the azalea season at the end of spring and the beginning of summer.

Ancient Cultural Relics Sites in the area of Mt. Cangshan