People's Assembly Hall, the largest auditorium in Chongqing City, is located in Xuetian Wan, Renmin Road and viewed as the icon of this city. As a unique oriental style building, it was begun in 1950 and completed in 1953, which stretches more than 66,000 square kilometers including 25,000 square kilometers building area. Designed by Mr. Zhang Jiade (张家德), who graduated from Engineering Department of Nanjing University, it is divided into three sections: auditorium, south building and north building. With 5-story, the auditorium is high to 65 meters and has a capacity of 4,206 seats. 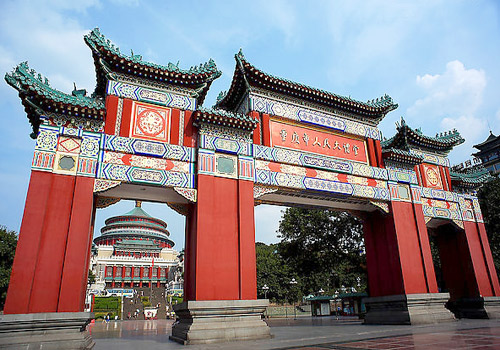 Chongqing City develops as a political, economic, cultural and transport centre of southeast region after the liberation on December, 1949. with a view of offering a high standard location of welcoming guests both from home and abroad, People’s Assembly Hall of Chongqing City was established under the leadership of Liu Bocheng (刘伯,1892 – 1986, Chinese military commander and Marshall) and Deng Xiaoping (邓小平1904 - 1997 Chinese politician, statesman, and diplomat). The building, designed by drawing on the merits of both Chinese and Western styles, is widely acclaimed as one of the must see tourist spots in Chongqing City. Although not particular utility in some aspects, it exudes the majesty and power to public. In 1987, People's Assembly Hall was first introduced to the world in a classical architecture book, which was editing by Royal Institute of British Architects and famous professors from London University. The book gives a detailed account of 43 prominent domestic architecture sites in China. And People’s Assembly Hall of Chongqing City ranks second among them. For more than 50 years, it is spotted by top leaders, ambassadors, artists and celebrities and so on.

The construction from 1950-1954 went through an extraordinary tough process. Without large size cranes, the architects resorted to the method of stacking. Squaring up by more than 35,000 bamboo and planks, a double-steel frames with a weight of 280 tons and a thickness of 1 meter and a cradling with over 40,000 rivets were supported on the pillars of reinforced concrete. Its top expands with heat and contracts with cold, which can move backwards or forwards for 44 millimeters. 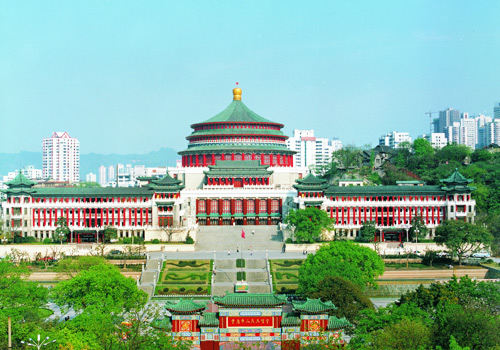 Three features of Chinese ancient architecture are epitomized from the People’s Assembly hall. First of all, timber construction is provided in the form of this Hall. Due to the limit of the length, thickness, flammability and perishable for wood, buildings are supposed to be small. However, the hall looks grand and magnificent with the help of high terrain and wide and firm base. Also, buildings are linked together to make a unified whole through the obvious and changeable combination. By all odds the People’s Assembly hall of Chongqing City is the best example in trying the approach. Finally, the emphasis on well proportioned of Chinese ancient architecture find a shape in this hall as well. Graceful and soft curves, slightly upswept eaves, wide and heavy body and firm foundation turn the hall into a steady and dignified style.

With a total investment of 70,000,000 RMB, the People’s Assembly hall of Chongqing City was accomplished in May, 2007 after taking 9 months’ reformation and improvement. More than 260,000 pieces of gold have been decorated on the top part inside the hall, which cost 10 RMB per piece and make the building dazzlingly brilliant. Over 170,000 peacock-blue glazed tiles have replaced the green ones, which evokes a feeling of timeless beauty for its graceful and splendid style. The themes of colored paintings on the rafters have been changed to Wan (万, myriad, Chinese character), golden dragons and palace drawings, which painting style is similar to Temple of Heaven and the Hall of Supreme Harmony and are reckoned as the first rank paintings in ancient time. The newly People’s Assembly hall was opened to public again in June.1st, 2007. At the same time, the nearby People's Square of Chongqing City, which was founded in 1997 with an area of 30,000 square meters, adds another fascinating part to your travel experience as well. The People’s Assembly hall is considered as one of the strongest icons of Chongqing City and really worthies the time to explore.