Chinese name: 北温泉公园 (Bei Wenquan Gongyuan)
Location: at the foot of Jinyun Mountain, Wentang Gorge, Jialing River, Beibei District, Chongqing City.
Ticket: CNY10 (extra CNY20 for Hot Springs)
Opening time: all day long
How to get there: take buses No. 25, 252,253, 254, 255, get off at Beibei Station (北碚站).
Best time to visit: all year round 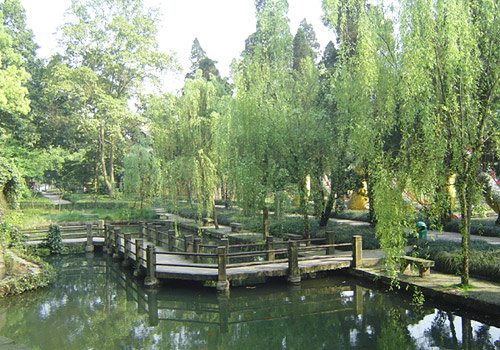 Main Attractions in the park

Hot Springs Temple was in its golden years at the early ancient time. Then it was damaged twice in Northern Zhou Dynasty (557-581) and Tang Dynasty (618-907) respectively. During Ming Dynasty (1368-1644) and Qing Dynasty (1616-1912), it has remained a decade-long period of prosperity after rebuilding. The temple consists of four halls including Guansheng Hall (关圣殿, also known as “Three Saints Hall” and served as the gate for the temple), Jieyin Hall (接引殿), Dafo Hall (大佛殿) and Guangyin Hall (观音殿, Avalokitesvara Hall). A wide range of statues and inscriptions of different dynasties were carved on the rocks nearby, full of art and history.

Being the top site of hot springs in Chongqing City, Northern Hot Springs truly lives up to the name with 10 springs. With abundance of water resource (6000-8636 tons per day), the quality of spring water is excellent and unpolluted. Hot Springs here are credited with miraculous curative powers for beauty and health care. At a constant temperature of 35-38 degrees Celsius, it contains various kinds of mineral salts and is an ideal treatment for rheumatic and skin diseases. In addition, a 50 by 20 meters national standard swimming pool and 75 indoor bathrooms are developed it as one of training bases for Chinese Swimming Team. 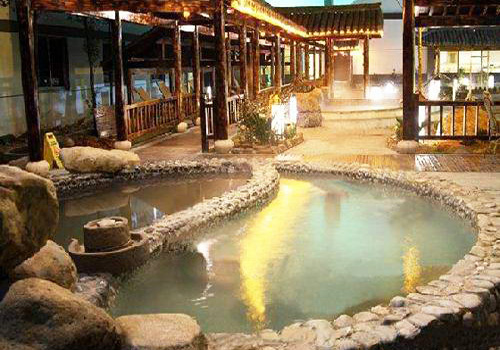 Viewed as one of nature's wonders, Ruhua Cava (乳花洞) is about 157.5 meters deep with a 30 meters drop on height. The complicate labyrinth is crisscrossed by various winding paths and grotesque stalagmites. Unlike normal Karsts caves, it provides abundant resources and great value for special geological formation. A lot has been done in researching its structure and causes by famous Chinese geologist Li Siguang (李四光,1889-1971). Actually, the research indicates the formation of Ruhua Cave is associated with hot springs. The deposits of hot springs are accumulated for more than 50,000 years and the cave is formed gradually. The U-series dating on the stalactite inside the cave shows that the main stage of Ruhua Cave is about 56600±500 years ago.

Located in the back of Hot Spring Temple, the carvings of Buddist arhat can be found here and they can trace back to 1120-1122 during the Song Dynasty (960-1279). What is more, an excellent figure of Mercy Buddha by famous painter Wu Daozi (吴道子, 680～759) in Tang Dynasty (618-907) can be observed here as well. A wide range of rock carving collection in different dynasties provides the best destination for archaeological and rock carvings research.

The shade of the old Cypress, Swaying Willow Trees, poetic green and pink lotus pond，soaring waterfall, crystal-clear springs and streams, thickly-wooded hills and exquisite pavilions, the delightful views can be appreciated in all four seasons of the park. Northern Hot Springs Park of Chongqing City holds appeal for famous guests, such as Chiang Kai-shek (蒋介石,1887-1975, one of the most important political leaders of 20th century China), Chou En-lai (周恩来,1898-1976, premier of the People's Republic of China) and Deng Xiaoping (邓小平,1904-1997, Chinese politician, statesman, and diplomat) and creates a comfortable and free atmosphere for total relaxation.