Dazu Rock Carvings of Chengdu City is renowned as a large rock carvings group of three Chinese religious beliefs including Buddhism, Taoism and Confucianism. Located in the north of Dazu County, 120 kilometers away from the Chongqing City, the carvings can trace back to A.D.892 during late Tang Dynasty (618-907) and were finally completed in 1162, which is more than 250 years later during the Northern Song Dynasty (960-1127). With more than 50,000 statues and 100,000 inscriptions in 75 protected sites, these rock carvings gain the fame as “the pearls of oriental art” and are rewarded as World Heritage Site by UNESCO on December.1st, 1999. Baodingshan and Beishan, which are the most well-known and popular sites, attracts some 1,000,000 visitors each year for the marvelous carvings skills, magnificent scales, various religious themes, and lifelike statues. As one of spectacular grotto arts, Dazu Rock Carvings are on a par with Mogao Caves, Longmen Grottoes and Yungang Grottoes in China. 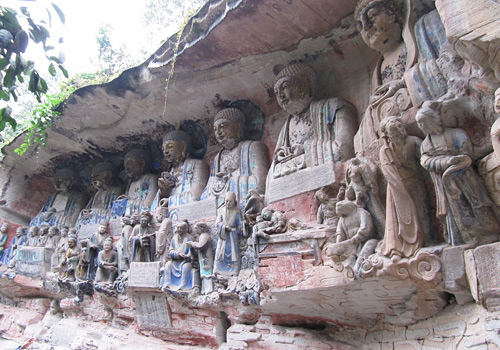 Baodingshan (or Treasured Summit Hill), is situated in the northeast of Dazu County and about 15 kilometers away from Longgang Village (龙岗镇, one of villages in Dazu County). The carving started in Northern Song Dynasty and hundreds of Buddha statues are scattered within 2.5 kilometers. The hill centers on Shoushan Temple where the places worth visiting are Xiao Fowan (小佛湾, Little Buddha Bay) and Da Fowan (大佛湾, Large Buddha Bay). These sculptures dotted sporadically around the east, north and south of the hill. More than 360 gigantic sculptures such as “Thousand-hand Bodhisattva”, “Six Divisions of Rebirth” and “Three Saint of Yanhua” are striking and always catch people’s eyes. Shoushan Temple, which was established in the Southern Song Dynasty (1127-1279), is spectacular with numerous carved beams. It stretches over 1631.68 square meters and is an unusually magnificent temple built on the mountain slope. Excavated by famous monk Zhao Zhifeng (赵智凤) for some 70 years (1174-1252), Baoding Rock Carvings evolves into a great Buddhist tantric site with tens of thousands of statues. 7.93 hectares has been zoned for the special protection area, 37.14 hectares for general protection and 53.30 hectares for development control area. On the lower left side of Shoushan Temple, Da Fowan lies in a U shape bay. Along the 500 meters long and 8-25 meters high cliff, visitors will be intoxicated by the skilful and excellent arts. Xiao Fowan is situated in the right side of Shoushan Temple. It is famous for the altar platform which make from stones. With a height of 2.31 meters and a width of 16.50 meters, the platform is carved with a wide range of statues and inscriptions. 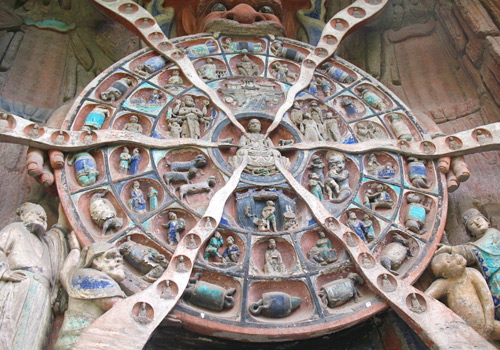 2000 kilometers to the east of Dazu County, the rock carvings in Beishan begun in late of Tang Dynasty and was accomplished in Southern Song Dynasty. Based in Da Fowan, there are five sites around, including Guanyipo (观音坡, Avalokiteshvara Slope), Yingpanpo (营盘坡, Yingpan Slope), Foeryan (佛耳岩, Buddha Ears Cave) and Beitasi (北塔寺, North Tower Temple ). With the total length of more than 500 meters and the height of 7 meters, 5,000 statues here shows wonderful and exquisite craftsmanship by skillful artists. Major carvings are in good preservation except for partial inscriptions, pagoda and small niches. Rise to a height of 545.5 meters above sea level, Beishan lies to the north of Longgang village in Dazu County. 7.62 hectares has been designated as the special protection area, 21.82 hectares for general protection area and 28.15 hectares for development control zone. Beishan is the home for various statues of Buddhist tantric, which account for half part of 51 different Buddhist themes. These refined carvings reveal the changes and development of Chinese Buddhist belief and grotto artistic styles from the late of 9th century to the middle of 12th century and provide abundant resources and great value for historical geography, religions and historical figures and so on. 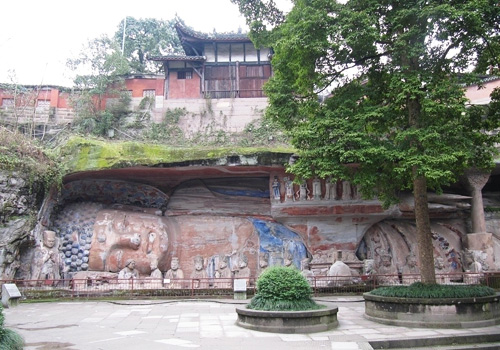 With an altitude of 444.6 meters, Shizhuanshan (石篆山) is in the Fohui Village, Sanqu Town (三驱镇佛惠村), which is 25 kilometers southwest of Dazu County. It was excavated during Northern Song Dynasty (1082-1096) and about 130 meters long and 3-8 meters high. 0.21 hectares has been classified as the special protection area, 0.18 hectares for general protection area and 2.47 hectares for development control zone. The rock carvings in Shizhuanshan are unusual and famous for the mixture statues of three religions, Buddhism, Taoism and Confucianism. Same as Nanshan Rock Carvings, it was also listed as cultural relics protection site on August 16th, 1956.

Shimenshan (石门山, Stone Gate Hill), which is with an altitude of 374.1 meters, is situated in Xinsheng Village, Shima Town (石马镇新胜村), about 20 kilometers away from Dazhu County. Carved from Northern Song Dynasty to Sothern Song Dynasty (1094 - 1151), they are complete 12 niches with a total length of 71.8 meters and a height of 3.4-5 meters. Within the hill, 1.06 hectares has been zoned for the special protection area, 1.30 hectares for general protection and 5.50 hectares for development control area. The combination of Buddhist and Taoist sculptures is the most special feature in this area, especially Buddhist statues. Shimenshan Grottoes were excavated in Song Dynasty and listed as “Important Heritage Site under State Protection” by the State Council of China in 1996. 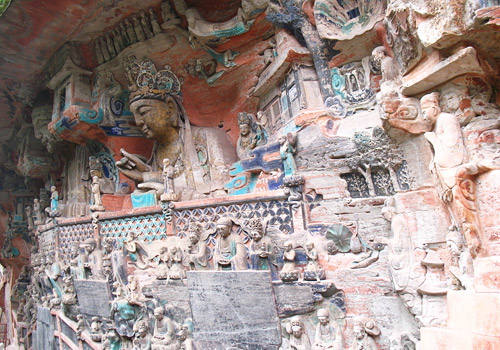 Nanshan (南山, Southern Hill) , also named as Guanghuashan (广华山) in ancient time, is located in Wuhuali (五华里), southeast of Dazu County. The Rock Carvings in Nanshan were begun during the Southern Song Dynasty (1127-1129). People's Committee of Sichuang Province designated the area as cultural relics protection site on August 16th, 1956. With a total 15 niches of Taoism statues, the hill is characterized by the wonderful Taoism works. Sanqing Gudong (三清古洞, Sanqing Ancient Cave ) is the most important representative work in Nanshan.