Wuhou Memorial Temple is a commemoration for the King Liu Bei (刘备) of Shu Kingdom (221-263, one of the regimes of the Three Kingdoms (220-280)) and his prime minister Chuko Liang (诸葛亮). It is the only combined memorial temple for both a king and his minister in China, as well as the most prestigious museum for Shu Kingdom relics and the most famed for the great wit Chuko Liang. Covering 37000 square meters and built in 2nd century, the present Wuhou Memorial Temple was rebuilt in 1672 during Qing Dynasty (1644-1911). Well-known for the Three Uniqueness- the essay, calligraphy and carving of the stone tablet for Chuko Liang, Wuhou Memorial Temple was the sole of the same kind that inscribed in the first batch of key heritage sites under state protection in 1961. The temple later established a museum in 1984 and was listed in the national-level museums in 2008. 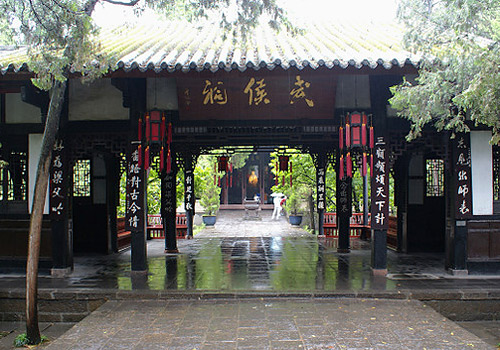 What to see in Wuhou Memorial Temple?

Wuhou Memorial Temple rides north to south, and the successive main gate, subordinate gate, Liu Bei Temple, annectent hall, and Wuhou Temple are strictly standing on the central axis according to the Chinese architecture system. And behind the Wuhou Temple, there are additional Sanyi Temple, Jieyi Temple and the like. On the west side, it is the Tomb of Liu Bei and related architecture, and on both sides of the axes are some gardening spots as well as some accessory halls. 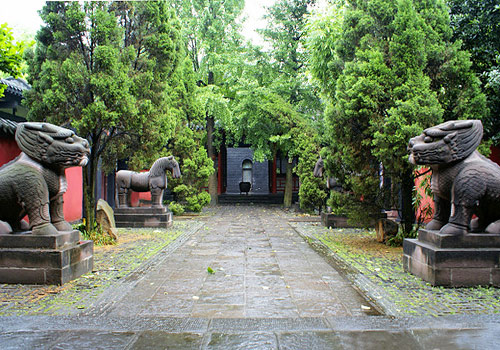 Between the main gate and the subordinate gate are six stone tablets in a row; four of them record the construction and maintaining of Wuhou Memorial Temple, one introduces the evolution of the memorial temple and the last but not least is the most celebrated one, the precious Three Uniqueness, which is a 367cm-high and 95cm-wide tablet praising for the wisdom Chuko Liang. The tablet was erected in 809 during Tang Dynasty (618-907), and it was so named as Three Uniqueness because of the article which was written by the great statesman and the prime minister Pei Du, the calligraphy from the famous calligrapher Liu Gongchao, and the best engraving on the tablet by famed tablet master Lu Jian.

Among all the buildings in Wuhou Memorial Temple, the Liu Bei Temple is the highest and the most magnificent. In the central of the hall is a 3-meter-high sitting gilding statue of Liu Bei which was accompanied by statue of his grandson Liu Kan in the left. In side halls are enshrined his powerful military officers Guan Yu and Zhangfei along with their sons.

Along corridors of the annectent hall are 14 lifesize statues of meritorious statesmen of Shu Kingdom; in the front of each is a small tablet recording the figure’s lifetime.

Though smaller in size when comparing with Liu Bei Temple, the Wuhou Temple for Chuko Liang is the highlight of the Wuhou Memorial Temple and the most prosperous part in the attraction. In the temple, there are a study, a guest room, and bell tower and drum tower standing opposite each other. In the main hall is a sitting gilding statue of Chuko Liang, behind which are his son and grandson, both devoted themselves to the Shu Kingdom. In the front of the statue are three bronze drums, which were made before 6th century; and on the walls, there are numerous stone inscriptions praising for Chuko’s wisdom and his great ambition. 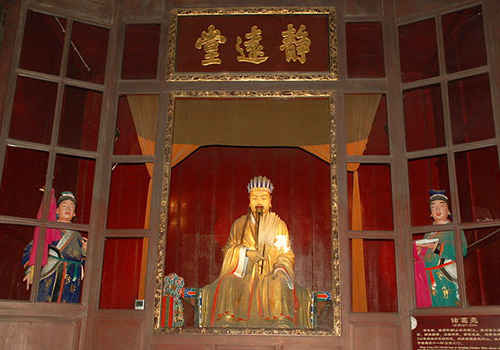 In the west of the Tomb of Liu Bei is a Southern Suburbs Garden, which was renovated to the garden in 1953 from the Tomb of Liu Xiang (Chairman of Sichuan Province during the rein of Republic of China (1912-1949)). In the garden, there are basso-relievo stone memorial archway, a pavilion with a tablet, some halls and the tomb of Liu Xiang.

Located in the east of Wuhou Memorial Temple, Jinli is an ancient entertainment street in the style of late Qing Dynasty and early Republic of China. It is an extension of the Three Kingdoms culture, which integrated with the folk custom and folkways of western regions of Sichuan Province.