Introduction to Mount Qingcheng- one of the birthplaces of Taoism with a history over 2000 years.

Qing Cheng Mountain sits above the earth at a height of 1,260 meters above sea level. It is the birth place of Taoism and is not only known in China as being one of the great mountains of Taoism, and as of 2000 it was also included in the world heritage list. The mountain is praised for being one of the most peaceful places under heaven, and it’s no wonder why, all you hear when you’re there is the sound of water running, birds singing, the wind blowing through the lush green trees, and your own footsteps. The mountain has 36 peaks, from the foot of the mountain looking up you’ll see at the highest peak is Laojun Pavilion. In ancient times the mountain was named Zheng Ren Mountain, it’s said that the mountain has 36 peaks, 8 big caves, 72 small caves, and 108 beautiful views. 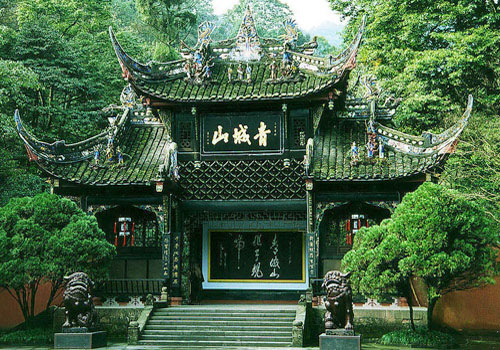 The mountain is divided into two parts, the front half, and the back half. The front half is the main part of this mountain with an area of 15 square meters, which includes many cultural relics, and palaces such as: Jian Fu Palace, Tianshi Hole, Chaoyang Temple, and many other palaces. The back area is covered by green trees, and running rivers. After a rainy day the area is covered in fog and can give you a kind of palace in the sky kind of feeling.

There is a natural phenomenon that occurs ever so often here in summer, it appears after the rain at night and is known as the sacred lamps, they appear through the mist and look like lamps drifting and bobbing in the air. They are said the lanterns lit by Taoist immortals to worship Taoist master Zhang Tianshi. As a matter of fact, it is the chemical phenomenon of auto-ignition because of the oxidation of phosphorus.

The seclusion of Qingcheng Mountain attracts many a scholars and artists since ancient time. The distinguished poet of Tang Dynasty Du Fu once visited the mountain and had wrote down one of his famous verses to praise the tranquility of the mountain. In the 1960’s a famous contemporary Chinese artist moved into the Qingcheng’s mountains in pursuit of painting an absolutely magnificent natural painting. However after many years and many paintings he moved to Brazil. However, regardless of what he did, he couldn’t let go of the sights he saw and often told those near him about the mountain that captured his soul, and hold it till this day. He drew a map of the area for everyone to see, and told them that it was a place of green trees, peaceful silences, and natural beauty. 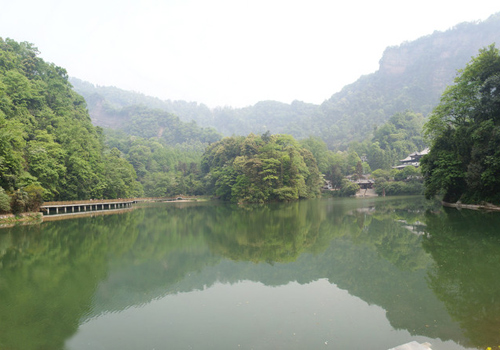 Qingcheng Mountain was the first open tourist area in China in 1982, it was praised for its beauty afterwards, won many national tourist titles, and in 2000 was titled as a 5A tourist area, and was included into the world heritage list.

Qing Cheng Mountain is one of the birth places of Taoism and has a history of over 2,000 years. During the Han Dynasty, the emperor came here to study Taoism, and found his Taoist way in the fifth cave. All of the palaces, pavilions, and towers (Jianfu Palace, Shang Qing Palace, Zushi Palace, Yuan Ming Palace, Laojun Pavilion, Wang Qing Palace etc.) are built around the fifth cave, it is the heart of the area. Zhang Daoling, formerly known as Zhang ling, one of the great masters of Taoism, came here and created Wu Dou Mi Dao-the earliest sect of Taoism, and after this he was known as the father of Taoism.

During the Tang Dynasty (618-907), the famous Taoist Du Guangting came to Qingcheng Mountain, who later was one of the great masters of Taoism and made influencial contributions to the development of Taoism.

Attractions in the Front Mountain of Mt.Qingcheng 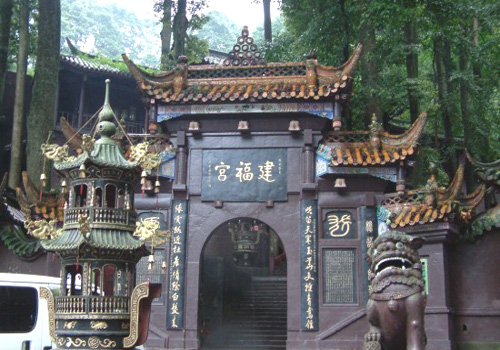 Jian Fu Palace was originally built during the Tang Dynasty, and took 18 years of construction. It was renovated and built over and over again over the years; the building that stands today was built during the Qing Dynasty (1644-1911). With a rocky landscape as a backdrop and green trees covering most of the land, it’s no wonder many a poet from past dynasties, and current poets have come, and still come here to write.

The Natural Picture is a pavilion that sits on top of the ridge; it is a decagon-shaped pavilion built during the rein of Emperor Guangxu (1875-1909) of Qing Dynasty. Because the scenery here is just so amazing as a landscape painting, hence its name. The pavilion is high up on the mountain, 893 meters above sea level, it over looks Jian Fu Palace, and Tian Shi Cave. This place was truly made as a painter’s paradise. 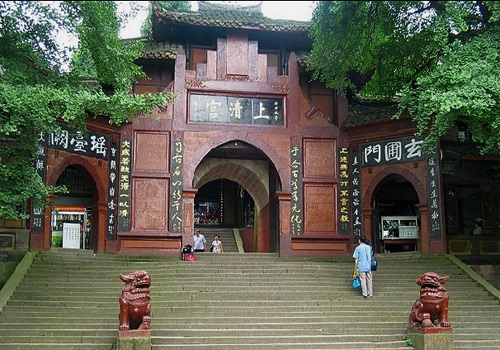 This palace is the highest one in the park. It was originally built during the Jin Dynasty (265-420), rebuilt during the Tang dynasty, and has been rebuilt a few times since then. The palace has many artifacts within it and has housed many important people over the years. It has been the home of thought, peace and tranquility for many a generation.

Laojun pavilion is located on the first peak of the mountains, at an altitude of 1600 meters above sea level. Its base covers an area of 400 square meters. Its levels are octagonal in shape, to coincide with Chinese beliefs. The pavilion has many a statues, which have been built by many different sculptors and artists over the years. Each statue is extremely life like, and the detail put into it is incredible.

This Palace was built during the Ming Dynasty (1368-1644); its courtyard was perfectly designed with flowers, water, and bamboo, it gives guests a type of tranquility that is hard to find anywhere else on the face of the world. Truly a masterpiece. 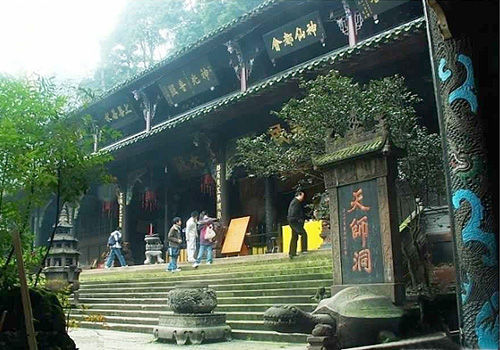 This cave has long been an oasis for Taoists, its beauty and its stillness is something that allows the loudest of souls to be quiet. It was built during the Sui Dynasty (581-618), and what remains of it is from the Ming Dynasty. It’s surrounded by mountains on three sides and faces water on one.

It’s just a little way from Tianshi Cave, it was founded in the Tang Dynasty, during that time it was a sanctuary for poets to come and be inspired, and to write some of the most beautiful poems. It was also once the escape for the Tang Dynasty princess Yu Zhen. She came here, and under the sacred pictures, statues and inscriptions on the walls prayed to become an immortal. It is a place of stories, and legends.

Chao Yang Cave is located on the east face of the mountain; it can accommodate one hundred people. Qing Dynasty’s Huang Yun Ge once resided here, and wrote of what he saw, and experienced. Many painters have come here, to paint and to think. Like the rest of the park it’s just the place for thinkers, painters, poets, lovers of beauty and basically everyone else.

On the back side of the mountain is a town called Du Jiang Yan, it is 70km from Cheng Du, and take sup an area of a hundred square kilometers. It is covered in lush green trees, running water, and stone homes. A mountain paradise if there ever was one. To the Northwest is Wo Long, to the north is Zhao Gong Mountain and to the east is Qing Cheng Mountain. The town sits in the midst of many ancient Mountains, tombs, and scenes that are all word class. If you come to Qing Cheng for a trip, you absolutely need to go and see this town. It is also a convenient place to stay a couple days. 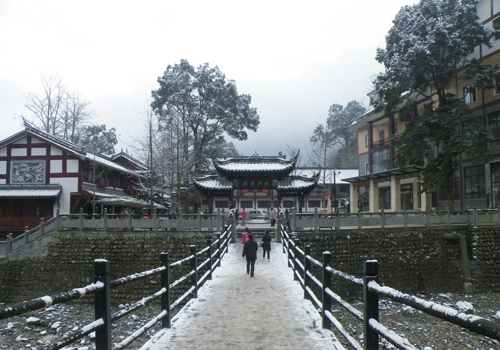 Qing Cheng is also known for its special dishes such as its "Bai Guo Chicken" which is a thick white soup, that smells out of this world good, and tastes like it smells…out of this world. The area is also known for its pickling of fruits, and vegetables, which to this day follows ancient methods. So the area has good food, but what about something to drink? It’s got that too. Qing Cheng Mountain also has its own tea, Dong Tian Gong Tea. So you can eat some great dishes and drink some great tea.

This mountain is a great place for any who is looking for an escape from big cities, or dirty air. Granted it is a tourist area, but you still can find peace and quiet here. So if beauty, peace, tranquility, and fun are your thing, you need to come here and see it with your own eyes.