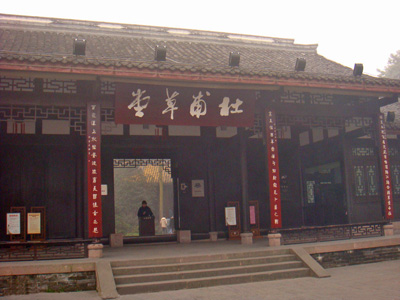 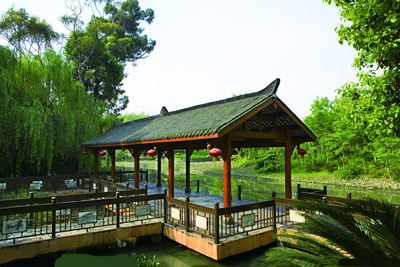 The thatched hut of Dufu is located in the capital of Sichuan Province, Chengdu, in the western part of the city standing near the Huanhua Stream. In modern times this thatched hut has been rebuilt and converted into a museum to commemorate the realist poet Dufu of Tang Dynasty. The hut was originally properly constructed when its inhabitant Dufu was in Chengdu trying to escape the An Shi Rebellion in A.D 759.

Dufu lived in this dwelling for 4 years and wrote over 240 verses many of which has become the poems the students have to learn now. Now due to Dufu's fame and the high-regard in which his poetry is held, this small thatched hut is regarding as a sacred site amongst the Chinese literati. The Dufu thatched hut is one of the largest and the most well preserved tourist sites of Master Poet Dufu in Chengdu.

In 2008 the Thatched House Museum of Dufu were nationally recognized as the first-class museums of China with Wuhou Memorial Temple and Guanghan Sanxingdui Ruins. Inside the Dufu museum there are over 30,000 collected works and more than 2,000 relics, including refined copies, photo-offset copies, and handwritten copies in Song, Yuan, Ming and Qing Dynasties, stereotype edition in morden times and translated version in 15 languages. The Dufu Thatched House Museum in Chengdu is the site where the works of Dufu are richest and best-preserved. Since the poems of Mast Poet Dufu are widely known, the Dufu Thatched House attracts many people for visiting. 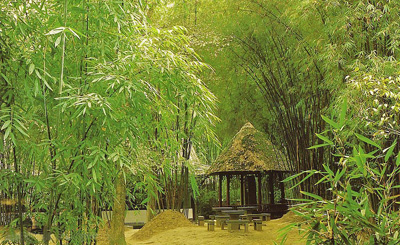 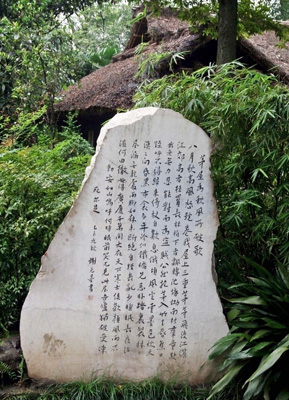 The complete tourist precinct covers an area of over 300 acres and has been reconstructed several times but still retains its unique Qing dynasty characteristics. The precinct not only includes the original site of Dufu Thatched House but also includes a beautifully maintained botanical garden-Mei Garden and a service zone (in Caotang Temple). Inside the original site of the thatched house, there are screen wall, the front door, Daxie building, Poem House, Wood Door and Gongbu Ancestral Temple arranged in an axile wire. On both sides of the wire stand the symmetrical winding corridors and other outbuildings, all winded and connected by rivers, bamboos and bridges. Stele pavilion writing "Shaoling Thached House" is to the east of the Gongbu Ancestral Temple, standing for the thatched cottage of Dufu, becoming the symbolic attraction of the thatched house and a famous spot of Chengdu.

Behind the Gongbu Ancestral Temple there is the Thatched House Scenic Zone, which reappears the countryside sceneries when poet Dufu was living and creates strong poetic atmosphere. In the garden area you can find a quaint screen wall and hundreds of calligraphy and carving works of Dufu.

Amazingly, Tang dynasty cultural relics Hall is in the eastern part of the tourist precinct; this greatly enhanced the cultural significance of the whole precinct, and drew more attention to the life of Dufu and the life of those who lived around him. The combination of beautiful scenery, a rich cultural heritage and ancient remains makes the ancient thatched hut an inviting tourist destination in Chengdu.