Chinese name: 成都大熊猫繁育研究基地 (Chengdu Daxiongmao Fanyu Yanjiu Jidi).
Location: No.26, Xiongmao Road, Chengdu City, Sichuan Province.
Ticket: CNY55
Opening time: 07:30-18:00.
How to get there: take bus in the downtown to Chengdu Zoo station, and then transfer by bus 198/198A to the Base

Introduction to Chengdu Research Base of Giant Panda Breeding

Located on the Futou Mountain 10 km north of downtown Chengdu, Chengdu Research Base of Giant Panda Breeding is one of China's most important refuges for endangered wildlife. Established in 1987, the Base has been being a nonprofit organization specializing in protecting, researching and breeding of rare wild animals, especially giant pandas, one of the commonly recognized national treasures of China.

At the very beginning, pandas in Chengdu Research Base of Giant Panda Breeding had only six giant pandas rescued from the open country. For the next 21 years, the Base caught no wild pandas from the wild and the number of pandas there had reproduced up to 83 including the original six. Meanwhile, the Base has been exchanging experience with other giant panda organizations and providing them with relevant technical support.

With the completion of the extension project, the area of Chengdu Research of Giant Panda Breeding has been enlarged from 1,060,000 square meters to be 2,000,000 square meters, where is covered with rich vegetation and giant pandas, lesser pandas, black-necked cranes, white storks, white swans, black swans, wild gooses, mandarin ducks, peacocks, golden monkey and some other endangered animals are fed. 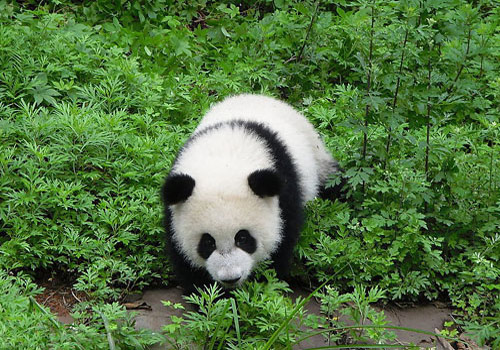 Zoologically, giant pandas belong to Carnivora, but in fact it is commonly known that bamboo is their favorite food. According to research, their progenitors had widely lived in South China approximately two million years ago and made up the ancient stegodon fauna. Till this day, most species of the fauna have died out, that's why the existing giant pandas are hailed as "living fossil".

Living in the dense bamboo forest in high mountains and deep gullies in West China today, giant pandas have been puzzling biologists in its classification – some put them under ursidae as a specific species, while some other classify them to be a new Ailuropodidae. Having experiencing a long history and still live today, giant pandas are considered to be of strong vitality. However, environmental degradation, inbreeding (because of small numbers), involution, hunt by human being, bamboo forest's wither after flowering, and some other negative factors make giant pandas face an endangered condition today.

To this day, there are less than 1000 giant pandas in the world and only can they be found in some areas of Sichuan, Shaanxi and Gansu. Scientific statistics show that up to 90% of male pandas and 78% of the females are barren, which bring many difficulties in breeding. 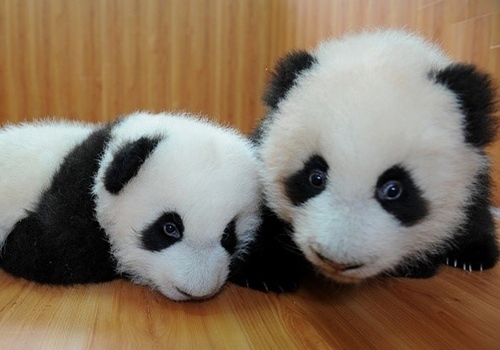 At present, it costs about RMB100,000 Yuan to raise a giant panda in Chengdu Research Base of Giant Pandas Breeding a year. If the life of a giant panda is 25 years, that means it will cost 2.5 million in his lifetime. Besides, there are 4-6 panda babies are born there annually. Both of these bring a problem in finance for the Base. Therefore, the Base promotes such an "adoption" policy, which allows people from all over the world to adopt the giant pandas by contributing CNY 100,000 a year.