Chinese name: 普宁寺 (Pu Ning Si)
Location: in Shuangqiao District, Chengdecity, Hebei province.
Admission fee: from 1st November to 31st March, 60yuan; from 1st April to 31st October, 80 yuan.
Opening time: 08:00-17:30.
How to get there: - By bus No.6.
- By taxi. It costs 5 yuan from Xumi Fushou Temple to Puning Temple, or from Qingchui Peak to Puning Temple.
Best time to visit: autumn, generally from September to November.

Located along the bank of Wulie River, north of Mountain Resort, Chengde, Puning Temple is also known as Dafo Temple, for a golden lacquer wood carving Buddha is enshrined here. Built in the year of 1759 and covering an area of 23,000 square metres, Puning Temple is the most intact and magnificent complex among the Outlying Temples of Mountain Resort, Chengde. 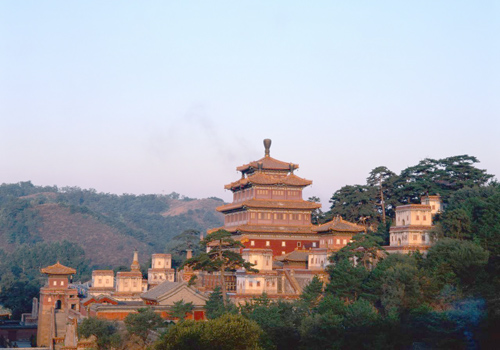 As the first temple built in the Qianlong period (1736-1795) of Qing Dynasty, it is a splendid combination of the Han style and the Tibetan style. Its Arya Avalokiteshavra statue, 22.28 metres tall, has been given a place in the Guinness Book of World Records. After repair it is even more religiously charming, thus being known for its highest cultural value and aesthetic value in a large degree. Moreover, not only was it among the first batch of 4A scenic areas of China, but also it was designated as World Cultural Heritage Site by UNESCO. To date, it has been the largest venue for Buddhist ceremony in the north China.

Puning Temple is a splendid combination of the Han style and the Tibetan style. Architectures in its south part are of the Han style, with its entrance, Hall of Heavenly Kings, the Great Buddha Hall lying on the axle wire, and the bell tower and drum tower, and west and east side halls lying both sides. In total it is 150 metres long from north to south, and 70 metres wide. With regard to the architecture in the north part, they are of Tibetan style, centred with Mahayana Hall. Other architectures here include fortification buildings such as Hongtai, Baitai, and four white lamaist pagoda.

There used to be wood memorial archways in the east, west and south, centred with Dagui Pavilion, but none of them are in sight. In Qing Dynasty, when it came to 25th December and 8th January of lunar year, temple fair was held, lama from the Outlying Temple gathered on the ground to stage performance. At that time, Buddhists coming from far and wide would stroll around, vendors would hawk along the streets. How bustling it was!

Of five doors of the entrance, three are passable. Inside the entrance are Nio, guardians of Buddha. 4.34 metres tall, they are made of clay stucco. 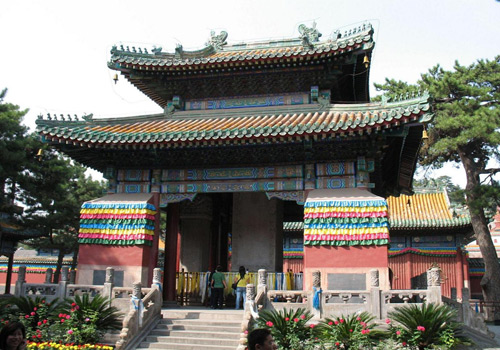 What visitors can see first when entering the entrance is the stele pavilion with double eaves of xieshan style. There are four doors in each direction, and a base is built with rails around. Inside the pavilion erected three stone tablets, the middle one "Tablet of Puning Temple", the east "Stone Tablet of Quelling Zhungar Leming", the west "Stone Tablet of Quelling Zhungar Hou Leming", each of which were written in four languages, namely, Manchu, Chinese language, Mongolian, and Zang language. Visitors can learn some background knowledge of the temple and the history of Qing Dynasty crushing down the revolt. On the north side of the pavilion are bell tower and drum tower.

It is the main architecture of the former part of Puning Temple, where Buddha of Three Periods and the eighteen disciples of the Buddha are enshrined. The middle one is Sakyamuni, the west one is Mahakasyapa, and the east one is Maitreya, each of which is 4.9 metres tall, situated on the 2.9-metre tall xumizuo. In front of the statues are three altars, next to which are erected two wood lacquer golden pagodas where 56 Buddha are consecrated. On the east and west side are the eighteen disciples of the Buddha, while the walls are painted with pictures of eighteen arhats. Side halls in front of the Great Buddha Hall lie in the east and the west, where two bodhisattvas and two hundred arhats are in sight. 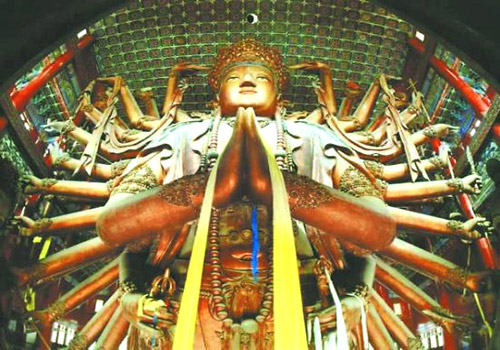 As a Tibetan style temple, the 36.75-metres-tall Mahayana hall is the major architecture of the latter part of Puning Temple, with four lamaist pagodas of different colours in the four corners. Its ingenious layout and construction reflect the world outlook of Lamaism. Inside is enshrined with Arya Avalokiteshavra statue, which is made of wood, 22.28 metres tall, and weighs 110 tons. So far it is the tallest and biggest wood statue around the world. Built in proportion to the human being, the exquisite and vivid statue is the gem of Chinese religion, while 10,090 fifteen-centimetre-tall Amitayus Buddha are orderly arranged in the gable walls.