A weekend in Yangshuo

When my friend Flo called me to tell me that he would come and visit me for the weekend, I was very excited. We decided to visit Yangshuo, a city close to Guilin, as the nature there was said to be very beautiful.

So on Saturday morning we took the cruise ship to get to Yangshuo. The tour was during four hours and included a Western-Chinese lunch buffet. As the sun was shining we spent most of the time on top of the boat to enjoy the mountains surrounding us and to take pictures. 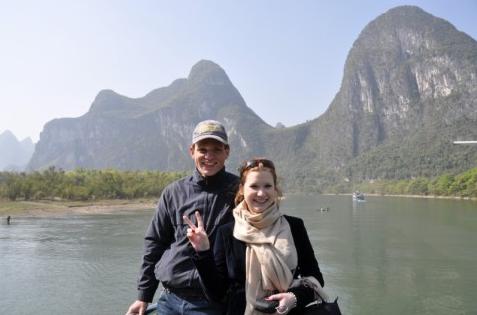 It was a very enjoyable time. Arriving in Yangshuo, we nearly were overrun by elderly women offering "bamboo boat tours", flowers or bike tours ("Wo bu yao!" means "I don't want that!").

After checking in at our hotel, we started to walk around the city, took a small local bus and enjoyed the view on theLi River. A Highlight is the "West Street" and the area around it, with lots of western restaurants, bars and people around. For the evening we had planned to watch "The Impression of Sister Liu", a famous performance with light effects on the Li River. Being lucky with the weather, we enjoyed the 1hour lasting show under the stars and were impressed by the light effects. After the end of the show we decided to check out the bars of West Street. It was very funny, because Chinese Bars are slightly different from western bars. From the music, over Karaoke performances of the customers to the way people drink beer. When going out, you should not forget to try "Li Qian", the most famous beer of this region. The next day we had a date with a local guide who went with us on a bike tour through the countryside to moon hill. It was amazing to see the farmers with their water buffaloes on the fields and to pass villages where women were washing their clothes in a river. Not to mention the beautiful landscape of mountains, rivers and fields. At noon we arrived at moon hill. 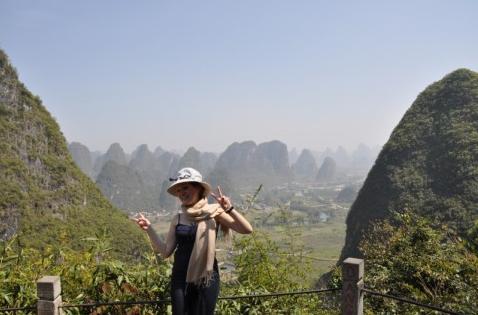 The 800 steep steps up to the viewpoint and about 23degrees Celsius did not stop us from climbing it up. Even if we had to face that our physical condition was not be the best, we reached the top and the beautiful view was worth all struggles! The view from up there is amazing!

The return was quite fast and when we arrived back in Yangshuo after 4 1/2 hours we were happy to enjoy a good lunch at "China Café". Of course we tried the local specialty, Beer fish, which was good, but quite spicy. When we were about to take the bus back to Guilin, the last highlight of the day stopped us from doing so. We were asked by three producers to participate in a television advertisement for the local beer "Liq". Finally we agreed and had a lot of fun while getting a good payment! So beware, if you are a westerner, lots of funny things might happen to you! :-)

Next Blog: How to get along with those spices??