My Silk Road tour – Another Day in Turpan 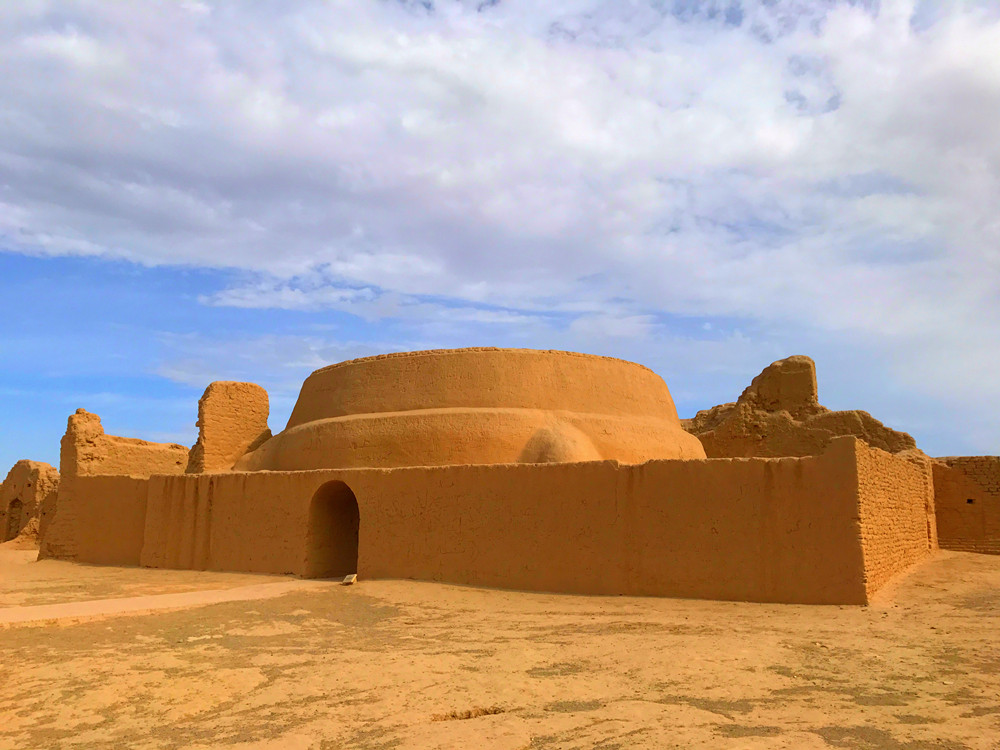 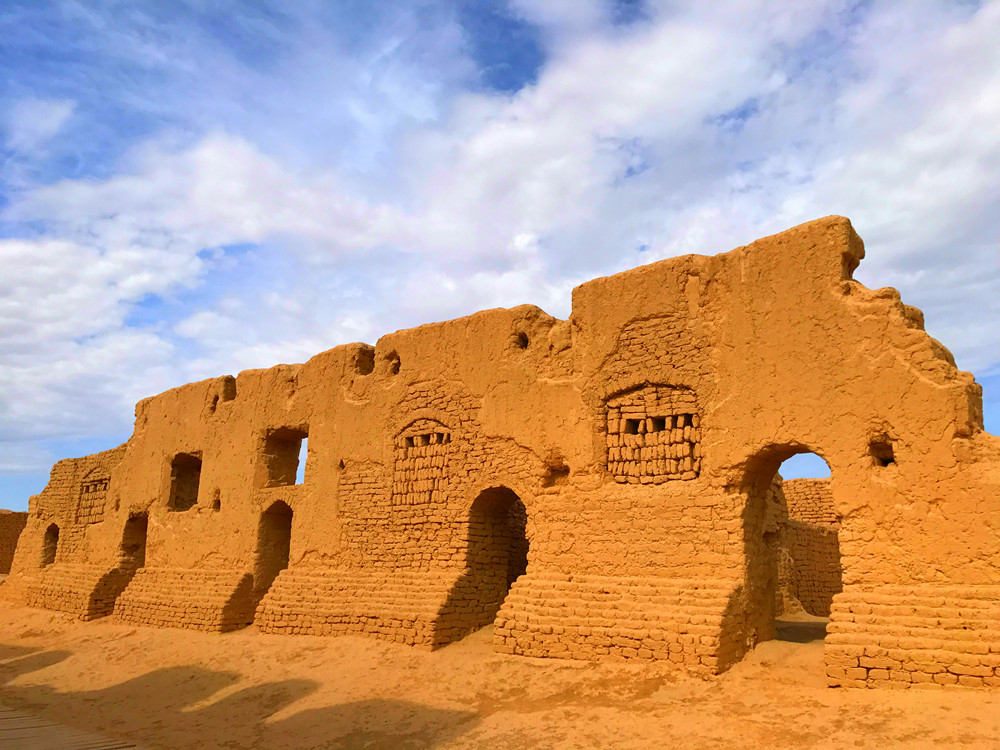 After a tight sleeping, we had another full day sightseeing in Turpan. Our first site is Ancient City of Gaochang, where is situated at about 40 kilometers east of Turpan. Although we visited Ancient City of Jiaohe , we are still eager to visit this one, we know it is another world full of stories. The name "Ancient City of Gaochang" means "King's City" in the Uighur language. As matter of fact, it was indeed served as the capital of Gaochang Kingdom (460-640) in the ancient time. It spans an area of more than 2,000,000 square meters and known as the largest site of ancient city in Chinese western region so far. It was originally a stopping point for merchant traders traveling on the Silk Road and then gradually became the political, economic, cultural and transport center of Chinese western region. It is a world religious hotspot as well. Oblong in shape, Ancient City of Gaochang has a circumference of 5.4 kilometers and is made up of three sections: outer city, inner city and palace. Entering the city, visitors can see walls, Khan Barrier and fire towers and so on. Established in the first century BC and deserted in the 13th century, Ancient City of Gaochang has a long history of over 2,000 years and has been in use for more than 1,300 years, which is the best witness for millenarian culture and history in western region. The famous story for Gaochang city was about a Monk. Monk Xuanzang (玄奘,602-664, a famous Chinese Buddhist monk and scholar in Tang Dynasty) made his seventeen years journey to India in search of sacred books of Buddhism. During his trip, he stopped at Gaochang for explaining and teaching sutras. It is said that the King of Gaochang enchanted by his knowledge of the sacred Buddha books and they become sworn brothers at last. Then in the wide ruins, you can find the temples, the Buddhism religion was popular and brilliant here. The Great Silk Road provided business and culture exchange to the locals, the hyperactive foreign trade in this area boosted the fast development in all aspects, especially attracted various religions around the world. Ancient City of Gaochang is a must see place in Turpan. 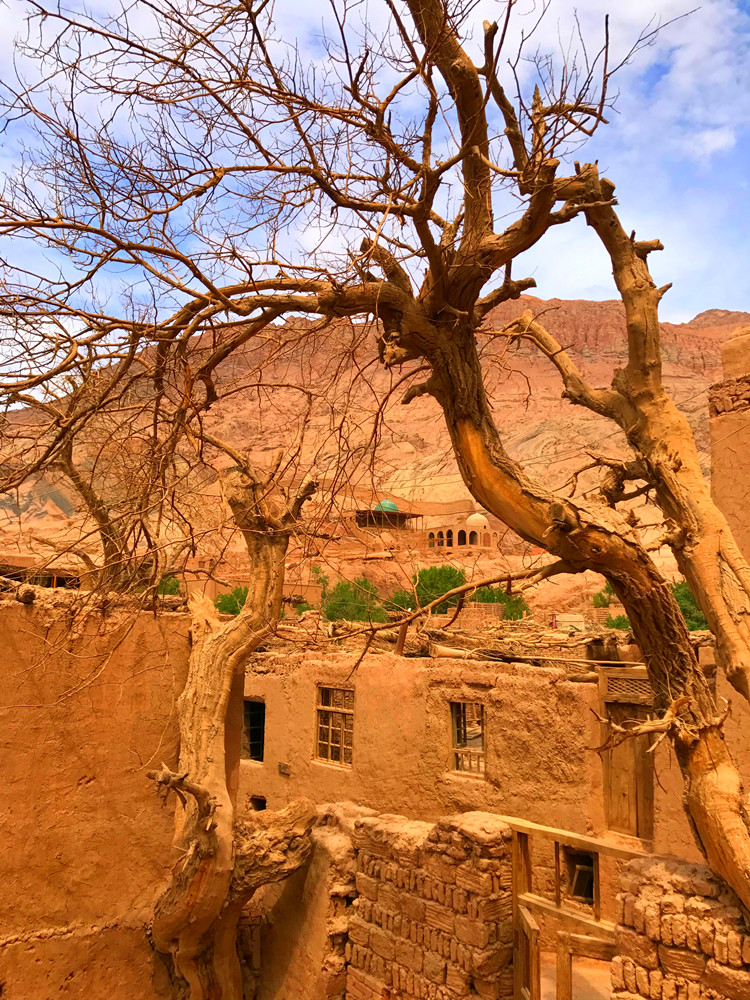 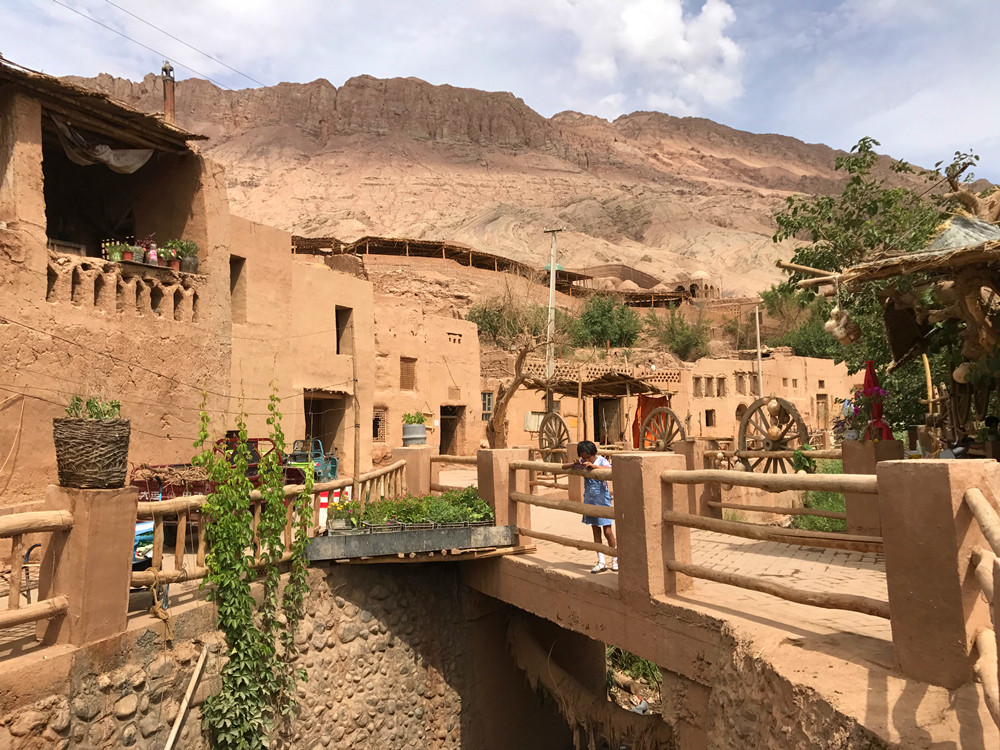 At the noon time, we went to visit a local and historical village called Tuyugou Village. Tuyugou Village has a history of more than 2600 years, it is the birthplace of the ancient CheShi Country in Turpan Basin. The residents of this village are all Uighurs, they retain traditional Uighur life customs. The local ancient houses are divided into two floors, upstairs and downstairs, all of which are earth constructions, Then this place is ranked as the world-famous Museum of earth constructions. Walking through the village, the local villager are nice and friendly, the big smile on their faces. The local children can mostly speak Mandarin, they like talking with you. The life here is simple and quiet, but I think the local people are happy and satisfied. 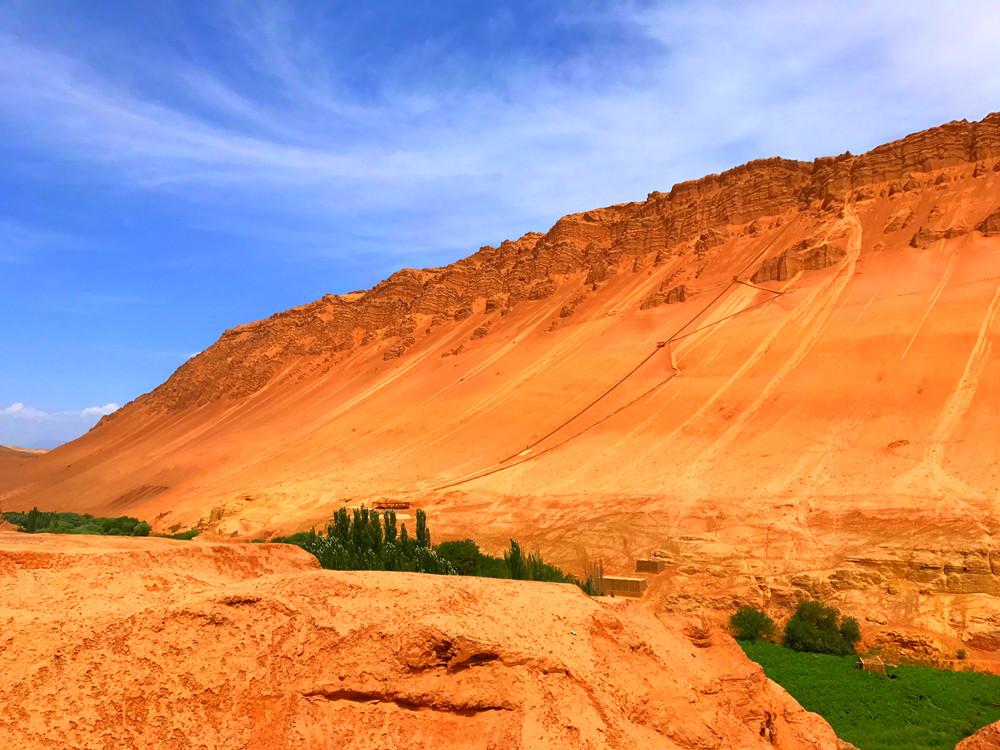 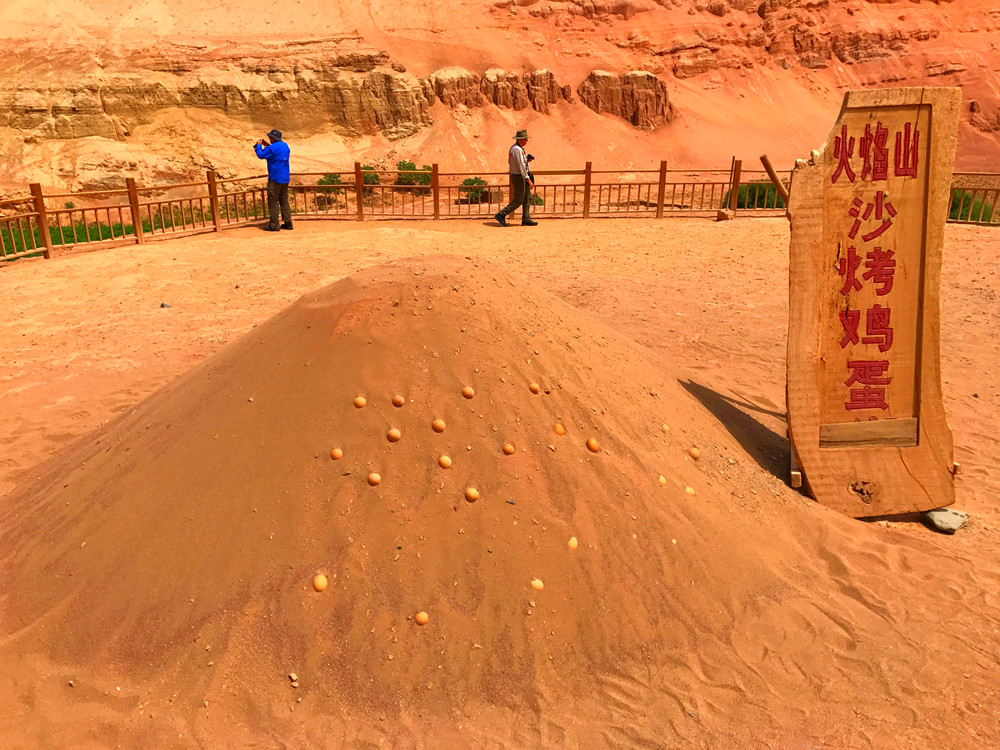 Say goodbye to the village, we heading to next spot- Bizaklik Thousand Buddha Caves, on the way, we pass by the famous mountain-Flaming Mountain. Located in the middle of the Turfan Depression, the Flaming Mountain is also named Red Mountain. It is made up of verrucano with a total length of 98 kilometers and width of nine kilometers, like a huge red dragon. It is the hottest place in China, whose temperature can reach 47.8 degree centigrade and its temperature of the earth can get to 70 degree centigrade during summer. You can see the local vendors selling the well-done eggs which are baked on sand directly, then you can imagine how hot the temperature here. 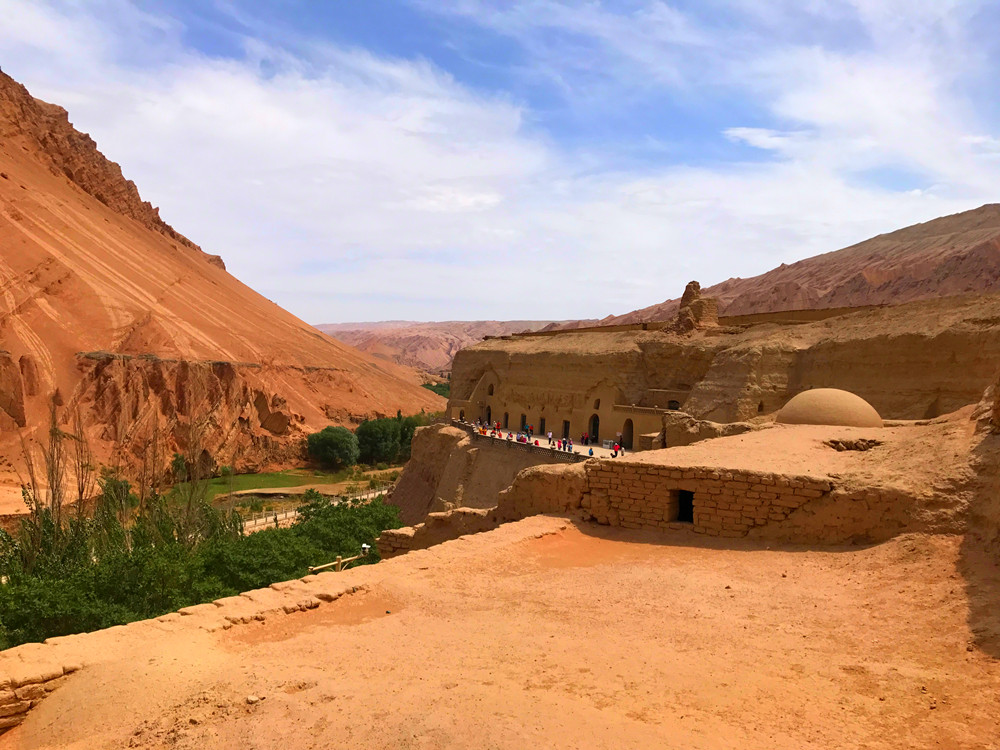 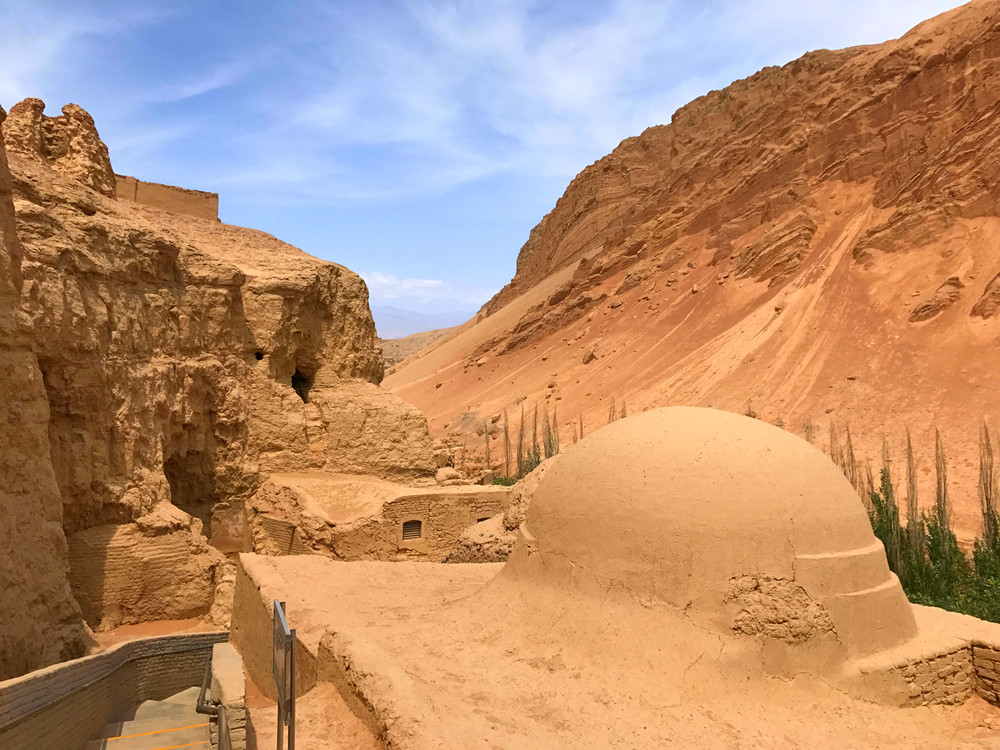 Bizaklik Thousand Buddha Caves located in the Mutou Valley of the Flaming Mountain, although it is not so famous as Mogao Caves in Dunhuang, Bizaklik Thousand Buddha Caves has the largest carved grotto and the richest content of mural paintings in Xinjiang. It has always been the center of Buddhism in Gaochang region. It has remained a decade-long period of prosperity during the time the Uighur established the kingdom here and served as King’s temple. Now travelers can visit some of the caves, enjoy the mural paintings, but no photos in the caves. The different paintings vividly reveal the different passions and characteristics of the times. The diverse themes can be found here, such as Bodhisattva, dragon decorations and Four Heavenly Kings. 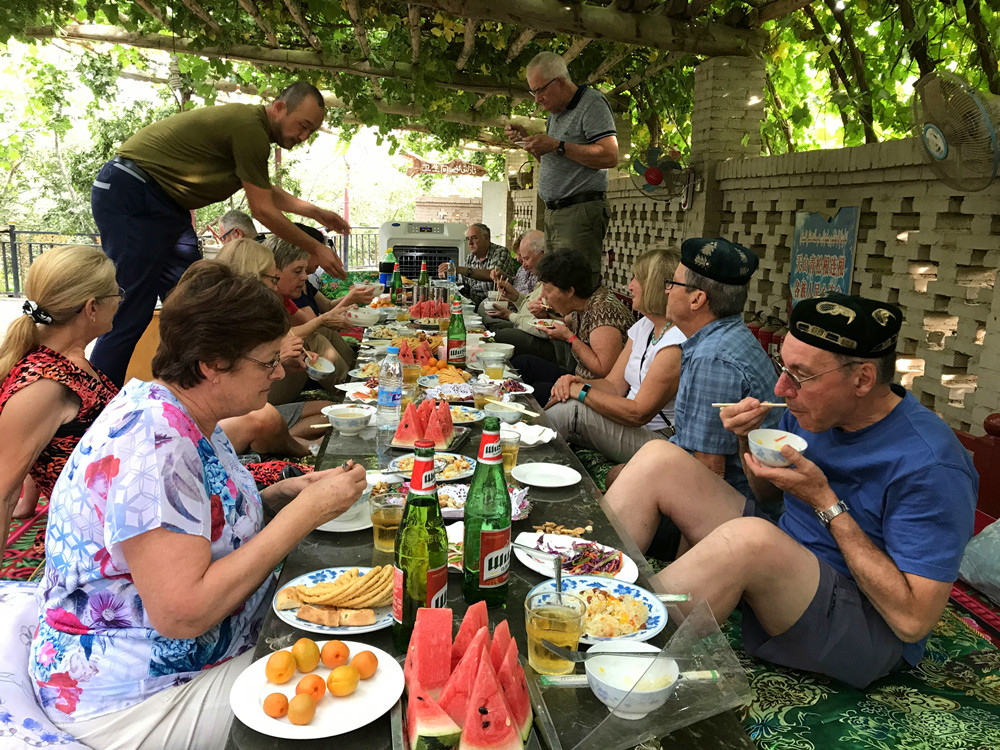 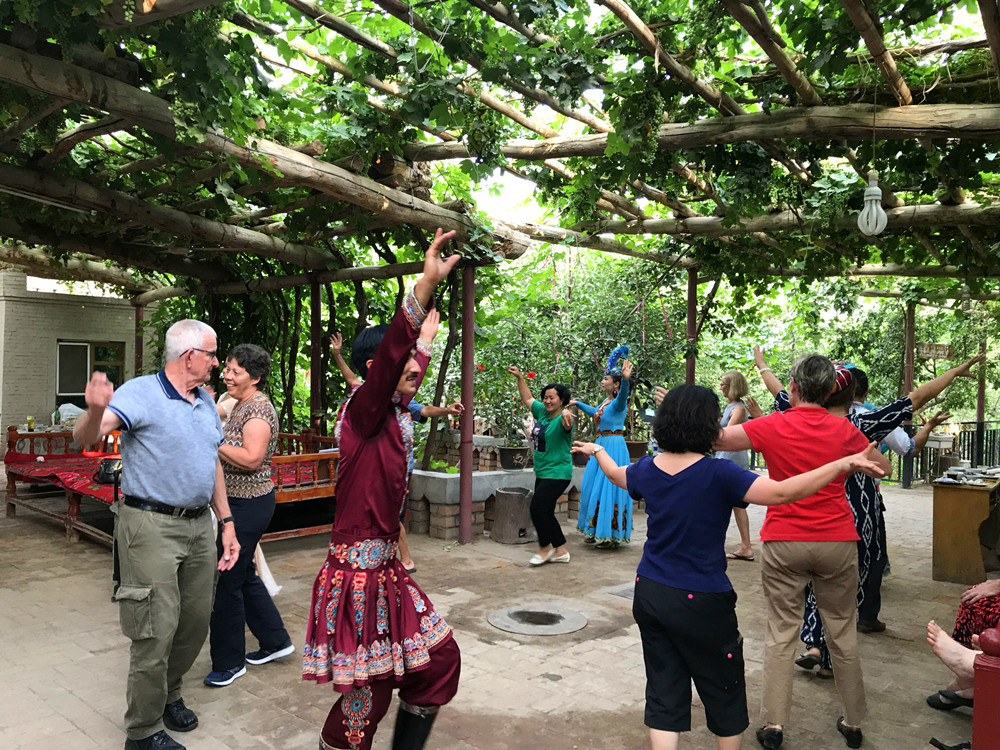 After the long sightseeing, we went back to hotel and took a break. We all looked forward to the activity at night. We went to a local Uighur family to visit and had dinner with them. The local family was so hospitable and generous, they prepared lots of food for us, we enjoy their traditional food like fried rice with dry grapes, a kind of crusty pancake-Nang, also the fresh fruit like apricots, watermelons, we all siting around the long table under the grape trellis. After the nice dinner, the family even prepared the local dance and song for us, we are invited to dance with them, so much fun. This was particularly beautiful memory for us on the trip, meeting the local people, talking with the local people, this made our trip special and meaningful. Our meeting together now, maybe just like the people from different countries meeting together in ancient time.

Next Blog: Those old objects almost disappeared in China