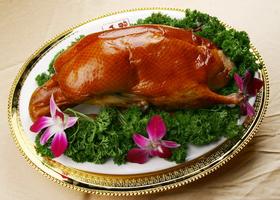 As the capital of People’s Republic of China, Beijing not only has a concentration of dainties all over China, but also delicacies from other countries. In the city, you can find thousands upon thousands of Chinese or exotic restaurants and hotel here and there, ranging from traditional dishes of Beijing flavour such as roast duck, rinse meat, snacks to cuisines characteristic of Chinese nation such as imperial dishes, private dishes, Islamic cuisine, to French western-style food, American-style fast-food, Japanese cuisine, Korean cuisine, Southeast Asian flavour dishes, and Indian food. In short, it is the eighth largest town of gourmets, taking hold of you with its appetizing smell from the kitchen and stalls!

Beijing roast duck is definitely a world-famous cuisine in Beijing. The duck is fine Beijing duck fed with meat. After roasting by coal, it looks like a ruby. With respect to its flavour, people will never find it greasy. It is really the top dainty around the world. And you can not miss it!! For your information, Quanjude and Pianyifang are the most notable shops selling roast ducks, both of which have hundreds of years’ history.

Beijing cuisine must be the first choice whenever you come to visit the capital. It tastes crisp, soft and fresh. Some world-famous dishes like Beijing roast duck, instant-boiled mutton, crisp fried chicken, Sea Cucumber with Quail Eggs never fail to pull in you. Especially, Beijing roast duck and instant-boiled mutton are must-eat as long as you travel around the city. For your information, Quanjude and Pianyifang are the most notable shops selling roast ducks, both of which have hundreds of years’ history.

Generally speaking, feast of complete Manchu-Han courses are divided into six, all of which are named after the great banquets of the Qing Dynasty (1636-1911) court. It is a feast of palatable food in season. There are three hundreds and twenty dishes on table, including one hundred and ninety-six courses and one hundred and twenty-four cakes and sweetmeats.

Glutinous rice rolls stuffed with red bean paste can be counted as one of the old snacks in Beijing. Many a residents in Beijing are fond of this snack very much. The main ingredient of it is proso millet and soybean; however, most snack bars now make the refreshments from sticky rice instead proso millet. At the sight of its golden colour, you cannot help trying it at once.

Steamed rice cakes with sweet stuffing are a traditional snack in Beijing. Every year around the Spring Festival, snack bars begin to offer it until the end of summer. It is mainly made of glutinous rice and stuffing of walnut meat, sesame, melon seeds, green plum and white sugar.

Chinese yam and date roll enjoys great popularity among the folks. It is quite nutritious due to its ingredients Chinese yam, date, walnut meat, melons seeds, and green plum. To a large extent, it can be regarded as medicated food.

Sweet fried dough twist is also called sweet ear in that it resembles people’s ear. Soft and sweet, the snack therefore was qualified as the famous snack of Beijing and famous snack of China in the year of 1997.

Sachima is one of pastries of Man nationality. Formerly, it was tribute, but later, as roast soy bean powder was substituted by white sugar, this snack was changed its name what we are familiar today.

Chinese doughnut is favoured by all Beijing dwellers, young and old, male and female. It absolutely tempts the heart of all people. As long as Beijing residents have fermented bean drink, they must have Chinese doughnut at the same time, which has already become a lable of Beijing.

-Suzhou Street (苏州街), close to Zhongguancun, has some restaurants rich in history.

-Fang Village (方庄) for both Chinese food and western food.