Introduction to Xiushui Street of Beijing

Started in 1980 with only several stores scattered among embassies and diplomatic apartments in the district, it was unexpected that 10 years later, the Xiushui Street became a symbolic name of Beijing travel as important as the Great Wall, the Forbidden City and the Peking Roast Duck, attracting a large stream of tourists both home and abroad. Enjoying a preferable location just next to the CBD business district of Beijing City and covering about 28 000 square meters, Xiushui Street is a must-seen spot as a comprehensive trade center with diversified trendy commodities, argy-bargy operating mode and traders from all over the country spoke different Chinese dialects as well as simple English. After a renovation in 2005, the new Xiushui Street wins a further development and focuses more on the high quality of commodities, the justified price and the more considerate service, which brings it more public praise even by some famous statesmen and stars, for example, the former president George Bush once shopping in Xiushui Street with his daughter during their stay in Beijing and purchased some silk Chinese robes. 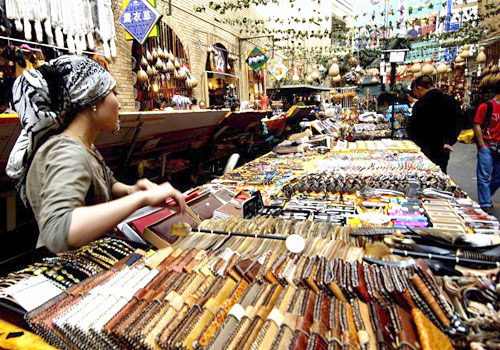