Covering an area of 440,000 square meters, the Tian'anmen Square located in the center of Beijing, capital city of China, is the largest square all over the world. Every day the solemn ceremonies of raising/lowering the Five-Starred Red Flag (the national flag of China) are held on the square. Also, large-scale military parade takes place here on the National Day (October 1st) every decade.

Spreading 500 meters in width and 880 meters in length respectively, the square is paved with light-colored granite boulder strips and allows one million people assemble at most at a time. On its four sides, the Tian'anmen Gate, the National Museum of China, the Qianmen Gate (aka. Zhengyang Gate), and the Great Hall of the People flank it clockwise and in the midst of the square are the Monument to the People's Heroes and the Chairman Mao Memorial Hall. 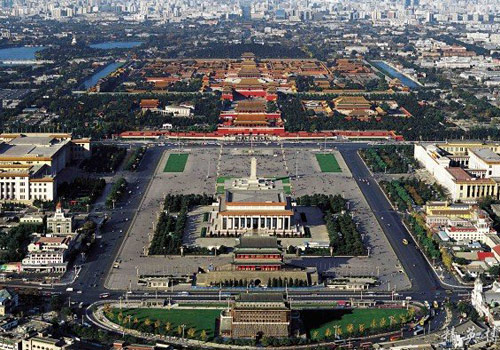 Tian'anmen Square was once an imperial structure outside the main entrance of the Forbidden City in the Ming (1368-1644) and Qing (1644-1911) dynasties, during which common people were strictly prohibited to access it. In1651, the ancient gate constructed in 1417 at the northern side of the square was renamed from "Chengqtianmen" to "Tian'anmen", hence the square was named after the new name of the gate afterward.

On October 1st of 1949, that Chairman Mao Zedong announced the founding of the People's Republic of China at the Tian'anmen Rostrum declared the coming of the new era of China. Tian'anmen Square began to be seen as the symbol of China since the moment and becomes an important constituent part of the National Emblem of China. 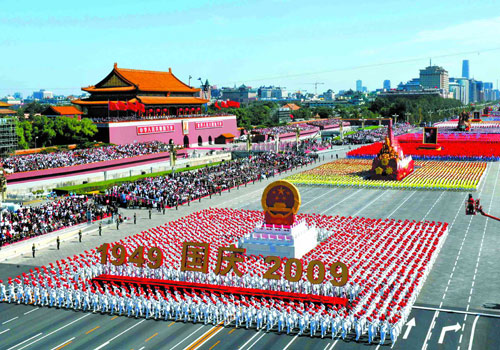 - Monument to the People's Heroes

The Monument to the People's Heroes (37.94 meters high) is the first structure built on the Tian'anmen Square after the founding of China in 1949. Made of 17,000 granites and white marbles, it is the tallest monument in Chinese history up to now, 3.24 meters higher than the Tian'anmen Rostrum. 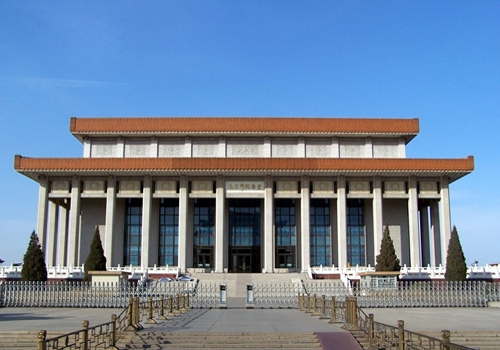 The Chairman Mao Zedong Memorial Hall was completed in 1977 on the Tian'anmen Square in memory of this great Chinese revolutionary leader. The main part of the hall is a square surrounded by 44 yellow granite pillars. 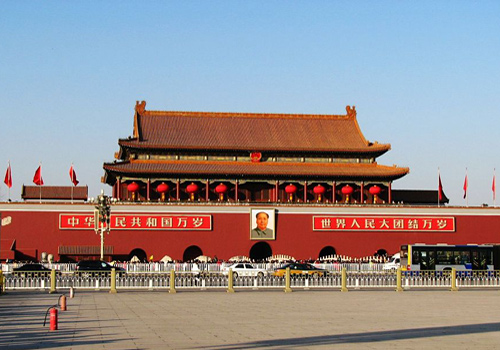 The 33.7-meter-high ancient imperial Tian'anmen Gate on the northern side of the Tian'anmen Square actually comprises the Tian'anmen Rostrum, which is of typical traditional Chinese architectural style with 60 huge pillars. When the gate functioned as an imperial structure in the ancient time, it was the place on which imperial edicts were officially issued, e.g. emperors' ascending the throng and marriage, or sacrifice to the heaven. What's more, emperors usually worshiped at the gate before going on an expedition. In front of Tian'anmen Gate is the Jinshui River (literally, Golden Water River), above which there are seven bridges made from white marble. The use of the seven were strictly prescribed for people in different classes: the widest middle one for emperors only, the two on both sides of the middle for the imperial family, the more outside for official at three-grade and above (nine grades for classification of officials' positions in ancient China), and the outermost two for official at four-grade and below.

The National Museum of China sitting on the eastern side of the Tian'anmen Square is a comprehensive museum which displays Chinese history, culture and art systematically. It was established in February of 2003 on the base of the former Chinese History Museum and the Chinese Revolutionary Museum. On March 1 of 2011 a renovation lasting for three years completed, enlarging the area of the museum up to 191,900 square meters. So far, this museum with 49 exhibition halls has collected more than one million pieces of exhibits, focusing on two basic topics: "Ancient China" and "Road to Renaissance".

The Qianmen Gate located on the southern side of the Tian'anmen Square is officially named Zhengyang Gate and was originally made up of the gate tower and the watch tower, which were once connected with a barbican but afterward were separated because of road repairing. Constructed in about the 15th century, the watch tower was burnt down by the Eight-Power Allied Forces in 1900 after suffering damages in fires in 1780 and 1849 respectively. In the next decades, several rebuilding projects to the tower went on successively. On January of 1990, the tower was officially opened to the public after an all-sided embellishment. Today, the concept of "Qianmen" not only refers to the gate itself but also indicatesthe Jewelry market in front of it and the Dashilar shopping street.

- Great Hall of the People