The Temple of Heaven

An imperial place of worship to Heaven

The Temple of Heaven (Tīan Tán, 天坛 in Chinese) is one of the major symbols of Beijing, famous for its large-scale and amazing architecture that millions of tourists visit every year. The Temple is a complex of Taoist buildings (though Taoism developed after the construction of the building) figuring as the largest ancient sacred place of worship in China. In ancient times, the Temple of Heaven was the place where emperors used to come every winter solstice to worship Heaven, unique element mandating emperors' status on the earth. Solemnly praying for a good harvest, symbol of the emperor's reign and stability, emperors needed a place totally dedicated to Heaven: a way for them to show their respect. The Temple of Heaven is the largest building of Beijing, even much bigger than the Forbidden City which was the place of the emperor who, as the "son of Heaven" didn't dare to construct his own building bigger than the one of the Heaven. Worth visiting place and top ten attractions to see in all China, the Temple of Heaven is also a UNESCO ranked cultural relic. Magnificent, grandiose and colorful, the place is a charming visit during a stay in Beijing.

History of Temple of Heaven

As a place of worship of emperors of Ming (1368-1644) and Qing (1644-1912) dynasties, the Temple of Heaven is for sure one of the richest tourist site filled with more than hundreds years of history. Being a place where emperors of Ming and Qing Dynasty  used to worship Heaven and pray for a good harvest, the temple was a forbidden place for decades of years and commoners were not allowed to enter it until the 20th century. 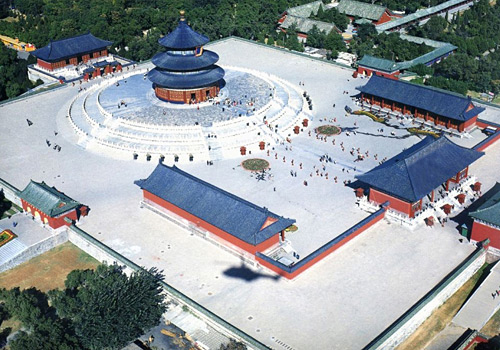 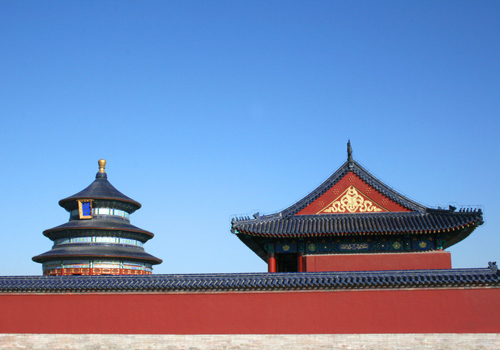 The modern historical period of the Temple of Heaven was not as bright as during emperors' time. The Temple became occupied by the Anglo-French Alliance during the Second Opium War (1856-1860), then by the Eight Nation Alliance in 1900 during the Boxer Rebellion (1898-1901). Turned into a temporary Forces Command Post, the Temple totally desecrated undergone several serious damages and robberies. By the fall of the Qing Dynasty in 1912, the Temple that had been neglected for years started to crumble until the decision in 1914 to reestablish the original status of the Temple. Turned into a Park in 1918, the Temple of Heaven was finally opened to the public who since then, keep on coming to the site for relaxing and having some rest in the huge city of Beijing. Described as "a masterpiece of architecture and landscape which simply and graphically illustrates a cosmogony of great importance for the evolution of one of the world's great civilizations", the Temple of Heaven attracted the attention of World's experts. Charmed by its size, colorful meaning and importance in China's history, the site was classified to UNESCO in 1998.

Particularities of Temple of Heaven 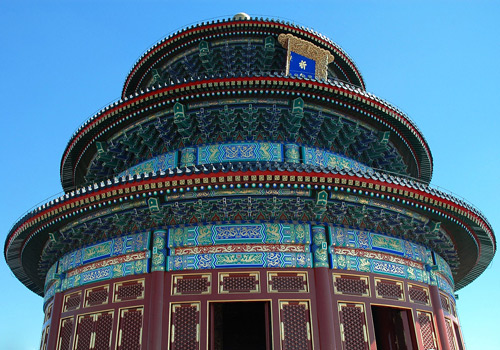 Dwelling dedicated to Heaven, the Temple has been built in a curious and rare combination of Ming (1368-1644) and Qing (1644-1912) dynasties architectural styles and technology. The Temple of Heaven covers an area of 2.72 million square meters and is enclosed with a long wall. Different gates located at each cardinal point are main entrances and way out for tourists. The northern part of the temple is round and symbolizes the heavens and the southern part is square, symbolizing the earth accordingly to both elements location in the universe. The temple is then divided by two enclosed walls separating the inner part from the outer part. The Temple of Heaven is made of a lot of beautiful buildings among which the most famous are the Altar (Hall) of Prayer for Good Harvests (祈年殿Qi Nian Dian), the Imperial Vault of Heaven (皇穹宇Huang Qiong Yu) and the Circular Mound Altar (圜丘坛Yuan Qiu Tan).

The Altar (Hall) of Prayer for Good Harvests 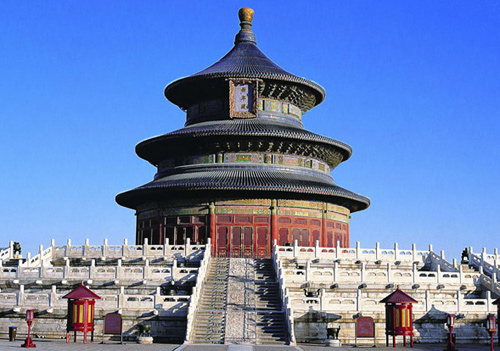 This wooden building of 38 meters in height and 30 meters in diameter is the one standing on a round foundation and three levels white marble stone (called the Altar for Grain Prayers): maybe the most symbolical of the Temple of Heaven's attraction site. The Hall is the most recognizable building with its cone-shaped blue roof crowned with a gilded knob: a real marvel for the eyes. The one that can be seen today is unfortunately not the original for it was burned in 1889 after dramatic wartime, but it takes all the exact shapes, colors and posts of the original one. Inside the altar, the architecture is something to pay attention to for this is all about Chinese symbolism and beliefs. Indeed, there are inside the hall 28 huge posts: the 4 along the inner circle represent the four seasons, the 12 along the middle circle the 12 months, other 12 along the outer circle the 12 "Shichen (时辰)" or ancient Chinese counting standard (1 shichen equaling 2 hours, 1 day being divided in 12 shichen). The Altar is as a consequence the representation of the Earth's system, a pure symbolism created thousands of years ago already. The black, yellow and green colors of the inner roof are like everything in the altar, representing the Earth and the Heaven.

The Imperial Vault of Heaven 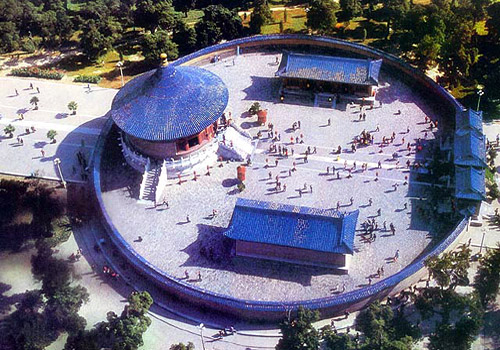 This other magnificent building in the Temple of Heaven is a single-gabled circular building built on a white marble stone base: the Imperial Vault of Heaven. Located south of the Hall of Prayer for Good Harvests and connected to it by the Vermilion Steps Bridge, the building is smaller in size but is as interesting as its neighbor for it was where various memorial tablets of God were placed. Indeed, the Imperial Vault of Heaven is a structure made of bricks and timber that is surrounded by the "Echo Wall (回音壁 Hui Yin Bi)", a smooth circular wall that has the specificity to transmit sounds over large distance, from one tip of the wall to another. The best way to appreciate the building will still be to look at it from far away so that the vault will reveal its blue umbrella like shape. 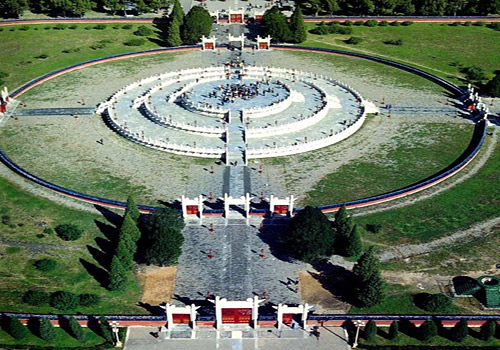 The Circular Mound Altar is an empty circular platform of three layered terraces with white marble built in 1530 (and rebuilt in 1740), located at the south of the previous Imperial Vault of Heaven. The altar is charmingly decorated by lavishly carved dragons and is composed of elements like balusters and many more all disposed according to the traditional Chinese symbolism. The center of the altar (Heart of Heaven or the Supreme Yang) is where emperors used to place when praying for good weather: being circular the altar was as a consequence doing like a resonance place producing echoes, an inventive way to communicate with Heaven.

Out of these three main scenic spots, other attractions may be also worth visiting during your stay in the site like the Vermilion Steps Bridge and the Three Echo Stones.

Of a 360 meter long, the Vermilion Steps Bridge (also called the "Sacred Way") is linking the Altar (Hall) of Prayer for Good Harvests to the Imperial Vault of Heaven. The particularity of the bridge is that its two ends are not at the same level: its south end is lower. Legend around the bridge developed through the idea that the bridge was a method to go through the Heaven. Composed of two different sides, the bridge was used by emperors, officials and princes: the Yu Route being used by princes and officials, the Wang Route by emperors only.

Like the Echo Wall, the Three Echo Stones are a curious attraction of the Temple of Heaven for when speaking facing the first stone of the Vault one can hear an echo on the second then third stone, etc… An interesting part of the visit that travelers are happy to try!

Symbolism around the Temple of Heaven 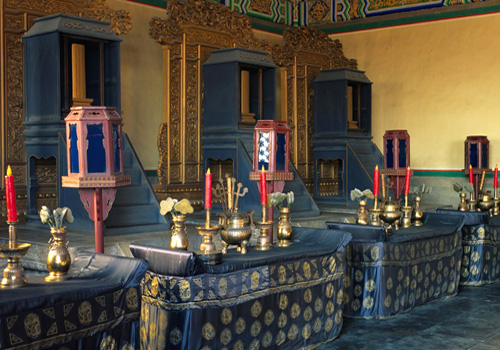 Like many places around Beijing vicinity, the Temple of Heaven has been designed according the ancient Chinese symbolism and mystical cosmological laws believed to be central to the universe. Every single aspect of the site has been meticulously organized and created for respecting the codes and manners for honoring the Heaven. In China, the number 9 is considered as the emperor's number for it is the most powerful digit. As a result, the Circular Altar is formed of 9 slabs lain in multiples 9. The inner part of the Hall of Prayer for Good Harvest is also ruled by the same kind of laws as every element correspond to the Earth Solar System. Located near to the Altar, the Seven-Star Stone Group is also the embodiment of the seven peaks of Mount Taishan, a sacred mountain of China. The Temple of Heaven is definitely where intense numerology is at play more than ever. Earth represented by squares, Heaven by circles, colors, echoing walls, seasonal blocks, specific disposition and size… When knowing about all of that symbolism the visit takes another dimension, like entering in a world where natural laws govern human's activity on Earth.

What to see in The Temple of Heaven today? 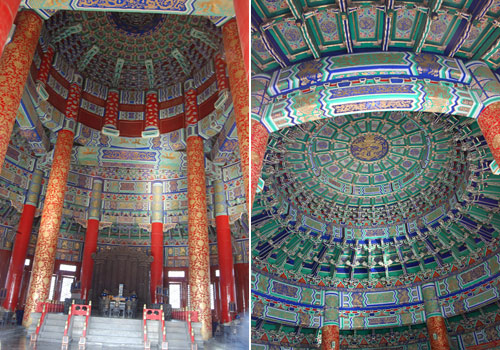 When visiting Beijing, mighty capital of China, to pay a visit at the Temple of Heaven is a must-do just like visiting the Forbidden City or hiking the Great Wall. Any tour package comprising Beijing will include this scenic spot Described as "a masterpiece of architecture and landscape design", the Temple of Heaven welcomes visitors worldwide giving them a deep impression of spirituality and ancient Chinese History. The Temple of Heaven is where visitors can experience some of the most exquisite and typically Chinese sights thanks to the buildings' architecture but also the people coming there every morning for their daily sport. 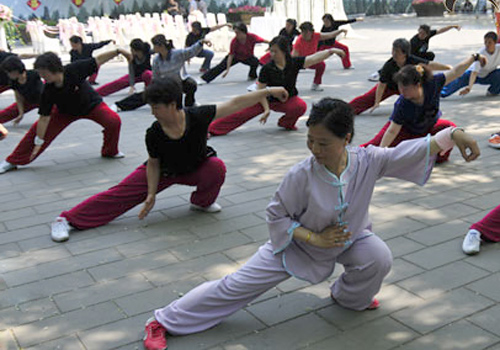 Indeed, if courageous enough to wake up at dawn, a visit to the temple is where seeing the old people performing morning exercises such as Taiqi, ancient martial art of sword, traditional dance, etc… Other scenes such as the Nine-Dragon Cypress (more than 500 years old) and the place many gardens are also a delight for those looking for some rest. Conveniently situated at the southeast of Beijing city, from the Temple of Heaven different places of interest can be reached, like the Taoranting Park or the Beijing Museum of Natural History, next to the west gate. The Temple of Heaven is not a simple visit on your itinerary, this is just a must that you will enjoy and remember for years.