How to get there: there are three ways here for your reference.
- Take a tourist bus at Qian Men (前门) or Beijing Railway Station (北京站);
- Take bus No.345 at Desheng Men (德胜门) and get off at Changping Bei Zhan (North Changping Station昌平北站), then take bus No.314 and get off at the Station of Ming Tombs Scenic Area (十三陵景区);
- Tourists can also take a tourist bus (running from 06:30 to 22:30) at the Tian'anmen Bus Center (at southwest of Tian'anmen Square, opposite the KFC on Western Avenue), and get off the Station of Ming Tombs Scenic Area.

Brief Introduction to the Sacred Way of Ming Tombs

Constructed since 1435 as the attached annex of the world-famous Ming Tombs located some 40 km northwest of Beijing City, the 7.3 kilometers long Sacred Way is as a matter of fact the main way leading to the thirteen imperial tombs inside the scenic area. The way starts from the stone memorial archway and ends at the gate of the Chang Mausoleum (长陵, Chang Ling), the tomb of Zhu Di (Emperor Mingchengzu, 1360-1424, the third emperor of Ming Dynasty as well as the one deciding to build this imperial cemetery).

The construction of the whole way last for more than one hundred years, during which The Shengde Stone Memorial Archway, the Great Red Gate, a pavilion housing a tablet, stone sculptures, the Dragon and Phoenix Gate, the Five-arch Bridge and many other structures were completed from south to north, presenting the magnificent splendor of the imperial power of the Ming Dynasty (1368-1644). 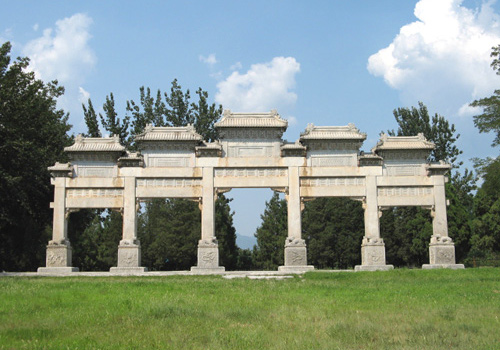 As the starting point of the Sacred Way and the whole cemetery area, this 14-meter-high archway with five passageways was built with white marbles in 1540, featuring its architraves and pillars carved and embossed with dragons, clouds, Kylins (a kind of Chinese dragon considered to be the ride of immortals). All of the carvings and embossments were well painted but now the color has been badly corroded because of its long history. Modeling traditional Chinese wooden style, the arhcway is no exception decorated with exquisite Dou Gong (斗拱, a system of brackets inserted between the top of a column and a cross beam).

The Dragon Mountain and the Tiger Mountain

Walking across the archway, visitors will have two small mountains in sight: the Dragon Mountain (or Mang Mountain) on the right, and the Tiger Mountain (or Tiger Valley) on the left, which look like a jumping dragon and a prostrate tiger respectively, hence the name. Another important reason for the name is that "Black Dragon on the left and White Tiger on the right" is an auspicious and powerful sign according to Taoism. The naming of the two displays clearly the monarchs' wish of being guarded by the two immortal beasts after their death. 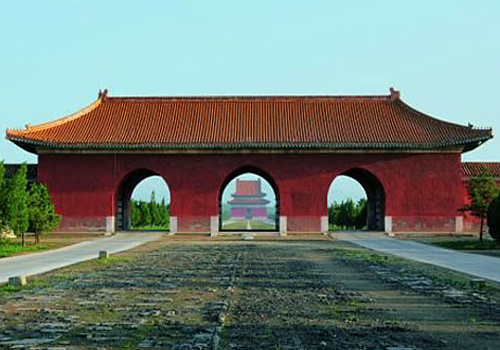 The Great Red Gate (aka. Great Palace Gate) with three passageway is the main entrance to the cemetery. Outside both sides of the gate there stand a "dismounting tablet" respectively, which warned officials to dismount from their horses there and entered by foot to show their high respect for emperors. And the two side doors originally connected by a 400-meter-long red wall were the places garrisoned by massive forces to prevent the commons from the forbidden area of the imperial power. However, most of the wall has been collapsed. 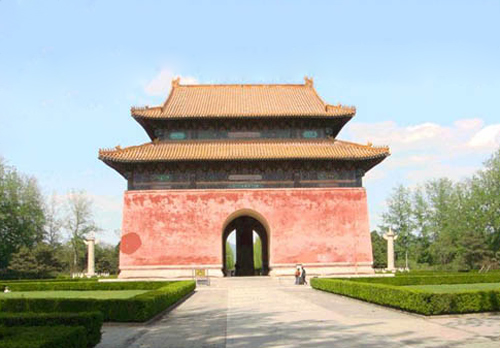 The next building after the Great Red Gate is the square Stele Pavilion specially constructed for housing a 6-meter-high stone stele extolling Emperor Minghcengzu. The tablet inscription with as many as almost 4000 Chinese characters was drafted in 1425 by Zhu Gaozhi (Emperor Mingrenzong, 1378-1425), the eldest son of Emperor Minghcengzu, written by Cheng Nanyun (1403-1424), a renowned calligrapher in early Ming Dynasty and took ten years to complete the carving. On the back of the stele an article by Emperor Qianlong (1711-1799) of Qing Dynasty (1644-1911) was reserve, recording the situation of the Ming tombs in detail. On the eastern side of the stele is the cost record of the Qing Dynasty's repairing the tombs, and on the western side visitors can see how Emperor Jiaqing (1796-1820) of Qing Dynasty related and analyzed the reasons why the Ming Empire fell down. At the four corners of Stele Pavilion there erect two pairs of Huabiao (华表, a kind of Chinese ornamental columns in front of palaces, tombs, etc.), at each top of which squats a beast respectively. 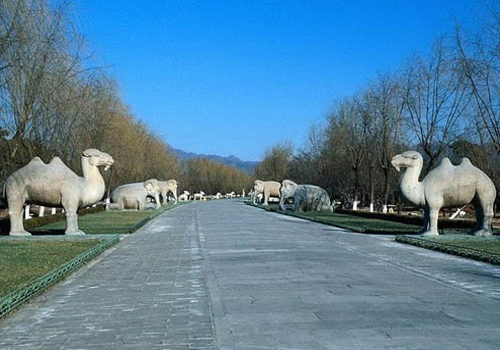 Behind the Stele Pavilion are two lines of stone lifelike sculptures of 12 officials and 6 beasts on both sides of the Sacred Way. Standing or kneeling there, the beasts can be classified to be six with different implied meaning: lions (brave and good at fighting), haetaes (legendary beast, good at distinguishing the good and the evil), kylins (another legendary beast, the symbol of auspiciousness), horses (a ride good at running), camels and elephants (loyal and virtuous). The arrangement of these stone sculptures implies that emperors could still rule anything after death.

Also known as Lingxing Gate, the Dragon and Phoenix Gate is the last gate on the Sacred Way. It was constituted by for carved stone pillars, which forming three passageways. On the upper part of the gate there are three "Flame Balls" carved of stone, which gives the gate another name - Flame Archway.

The Seven-arch Bridge approximately divided the Sacred Way into two equi-length sections is the last structure on the way. Passing the bridge, visitors will see few structures on the way until arriving at the pavilion in front of the Chang Mauseleum.