Best time for visit: all the 4 seasons

Recommended time for a visit: half a day


One of the best preserved section of the Great Wall
Mutianyu (慕田峪) Great Wall, is one of the most famous and best preserved sections of the Great Wall together with Badaling (八达岭) and Jinshanling (金山岭) sections. Located in the northeast of Beijing Municipality, Mutianyu is connected with the smaller hotspot sections of Jiankou in the west and Lianhuachi in the east. This section used to serve as the northern wall defending the capital city and the Imperial power, like a giant galloping dragon on mountain peak preserving the entrance to emperors' kingdom. Important section of the Great Wall, Mutianyu is filled with a great amount of historical and cultural relics as well as the most important number of watchtowers. About 20 of them are distributed along the opened tourism area that stretches for about 2250 meters long. Travelers visiting the Mutianyu Great Wall have the possibility to experience the Great Wall in different ways, whether using the thousands stone steps or a cable car. Definitely one of the best places to hike for experiencing the Great Wall, Mutianyu and its surrounding lush forest and woodland transports everyone back to ancient times, back in Imperial China.

History of the Mutianyu Great Wall 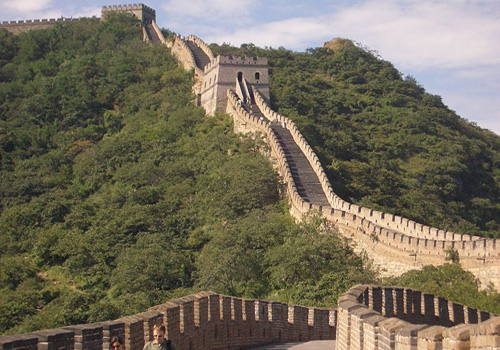 Oldest section of the whole Great Wall masterpiece, Mutianyu was first built in the mid-6thcentury, during the Northern Qi Dynasty (550-557). The foundation construction of the defensive wall started during the Qi, while the present wall supervision to strengthen its defensive potential was operated by Generals Xu Da, Tan Lun and Qi Jiguang, during the Ming Dynasty (1368-1644) and Emperor Yongle's reign (1402-1424). Mutianyu was built on a strategic pass and served quickly as the northern protective screen guarding the capital. The walls of the section were built using the materials coming from the nearby Qian'an County. Working everyday for the accomplishment of the Emperor's wish of a material barrier with the outside world, the construction of the Mutianyu Great Wall Gateway was finished to build up in Emperor Longqing's reign (1567-1572). Due to wartimes and the effects of Nature, the wall had to be reconstructed several times such as in 1568 and 1569. Playing its role as a wartime barrier with invaders, the Mutianyu section was a pivotal point on the Great Wall as aliens forces attacked on every sides of the wall. This was only in 1987 that the section was appraised as one of the 16 best scenic spots of Beijing city. Recognized as the World Best of Beijing Tourism in 1992, the Mutianyu Great Wall was then ranked as a 4A grade scenic area in 2002. Mutianyu is since then definitely the largest construction scale of best quality among all sections of the Great Wall.

Mutianyu Great Wall in depth
Despite its old character among all the different sections of the Great Wall, Mutianyu is also renowned for its beauty and importance together with the Juyongguan and the Huilingkou gateways. The Mutianyu section's function, like the whole Great Wall, was to keep enemies under control in the exterior and protect the capital in the interior. Mainly built with granite produced at a few kilometers away, the walls of Mutianyu Great Wall are 7-8 meters high with a top of 4-5 meters wide, and even an abrupt climbing rising up to 117 meters high. The Mutianyu section attracts the attention of its visitors because of its unique characteristics that can be distinguished out of the many sections composing the Great Wall. Indeed, winding through 1.4 miles to the east through mountains and high ridges, the wall looks almost indestructible. Mutianyu is the only section that comprises a total of 22 watchtowers, a number barely seen anywhere else on the Great Wall. Located in a land where flourishes a luxuriant flora, Mutianyu's smaller sections are called according to the surrounding hills. Names such as the "Ox Horn Edge" or the "Flying Eagle Flies Facing Upward" and the "Arrow Lock" are examples of names used by the locals living around the masterpiece. The construction is even more important for its strategic position on the line with the enemy. Indeed, battlements used to take place on both sides of the walls. All these prominent particularities give to Mutianyu its uniqueness and prominence among all sections of the mighty Great Wall.

Watchtowers and other wall elements 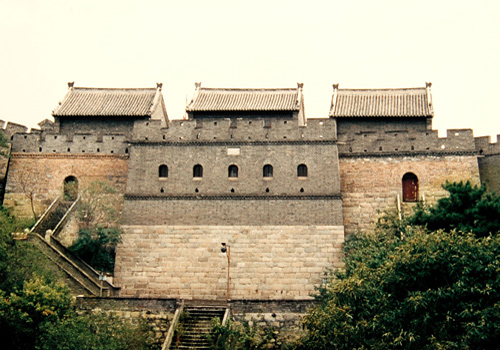 Different from other sections composing the Great Wall, Mutianyu section is definitely the area where admiring the most important number of watchtowers and other ancient constructions. When visiting Mutianyu, travelers are left speechless in front of the closely packed enemy towers and perilous passes, densely placed. A total of 22 watchtowers battlements, a shelter for defense soldiers when fighting, are indeed located on the section, with three main one referred as the three hollow enemy towers: one big in the centre and two smaller on both sides. Located on the same level, the three watchtowers are connected to each other inside the wall and compose a rarely seen structure. The outer and inner parapets of the wall are both used to defend against enemies coming from the two sides, a feature very rare on other parts of the Great Wall. In order to reinforce this defensive use, some of the parapets are even seen tooth shaped instead of the regular rectangular form that we see in the Great Wall. Enemy towers, enemy platforms, wall platforms, extension rooms…everything is packed in the same place: an architecture indicating the important strategic position of Mutianyu Great Wall in history and during wartimes.

Surrounding villages and activities
Constructed on a land where villages were already set, cultural and historical relics can be found near to Mutianyu Great Wall. The Mutianyu village was to this point one of the earliest villages near to the Great Wall to be hailed by the Chinese government as a model village because of its rebirth, thanks to tourism and glassware industries. The place is today a favorite of travelers looking for some ancient architecture and typical Chinese insights. Some attractions along the section can be found such as a wheeled toboggan where to ride down on a winding metal track, a great entertainment for kids or parents! Though covered by 96% of forest and grassland, Mutianyu is an area where some branch cities developed on the hill ridge against the inner and outer side of the wall. Flourishing section of the Great Wall, Mutianyu is definitely where coming to have the deepest insight of China's Great Wall and China's gorgeous history.

What to see in the Mutianyu Great Wall today? 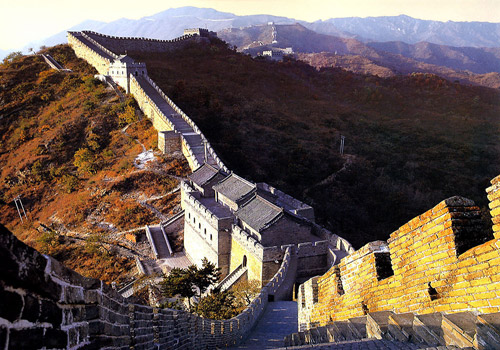 When visiting China and planning to have a hike on the Great Wall, Mutianyu must be one of the choices to experience one of the best discovery of this human masterpiece classified to UNESCO. High scenic spot of China, Mutianyu Great Wall is where experiencing many different insights of China starting with a hike and a climbing using a cable-car providing an all-around service. Secured and meeting international standards (No. 1 Cable Car for Great Wall), taking the machine to reach the top of the wall's section is way more rapid and convenient than the huge stairs, used today by the most courageous visitors. If still choosing to climb up step by step, there are two ways available: south and north where appreciating the different sceneries along the Great Wall, changing with the seasons. Not high in altitude but giving some stereoscopic views, Mutianyu is the perfect place to enjoy China's amazing landscapes. Being an amazed and entertained area where to take some rest for a whole day or more, Mutianyu is also where going for spending a good day with friends or family. There, the China Dream Stones City, Lu Ming Recreation Zoo and the Slide Way, are the three newly established scenic areas encompassing the Great Wall culture, stone culture and entertainment at the disposal of visitors.

Gorgeous nature and landscapes along the 4 seasons 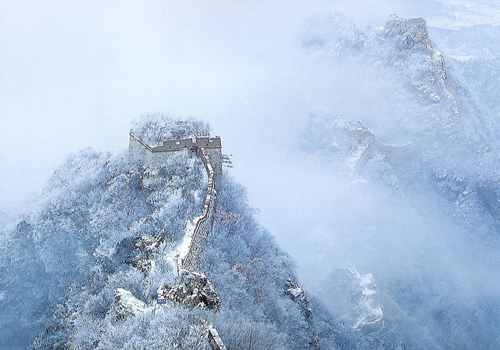 Particularity of Mutianyu Great Wall, the surrounding landscape is what makes the difference with other sections of the monument. Indeed, Mutianyu is known for being surrounded with mountains, trees (more than 20 pines species of over 300 years old and about 200 pines species of over 100 year old) and beautiful sceneries. One typical aspect of the section is its changing beauty according to the seasons. Whether visited in spring, summer, autumn or winter, Mutianyu is giving to its visitors the most impressive shots ever seen. Spring and its fragrant flowers vying with each other in beauty and blooming are one of the most famous sightseeing to experience. Summer, recovering mountains with green coats and a delicate sound of flowing lake is enchanting travelers in holiday. Autumn, and its fruitful trees and red leaves dancing with the wind are one of the most praised sceneries by Chinese people. Finally, when winter comes, Mutianyu Great Wall is painted of pure white and coated with silver costume: a northland scene in China, like a dream lived in another world.

Mutianyu travel tips
When visiting Mutianyu Great Wall during your tour in China or stay in Beijing, we can recommend you some travel tips about accommodations and restaurants that are worth a visit. 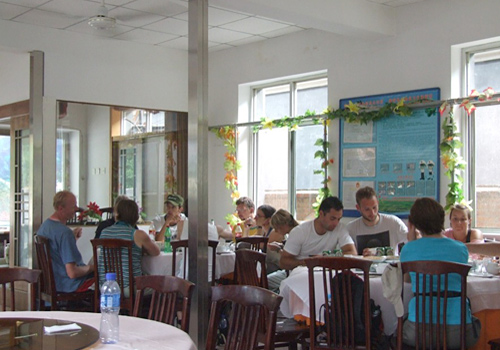 Around Mutianyu, some farmhouses with preserved authentic architecture and lifestyle can be discovered by the most adventurous. The Fugui Hong Farmhouse (富贵宏农家院, Fugui hong nongjia yuan), Baosheng renjia Farmhouse (宝生人家农家院, Baosheng renjia nongjia yuan) are worth a stay before, in the middle or after your visit of the Great Wall. Place appraised since 2000 as the second grade of hotel in the area, the mountain lodge Great Wall Villa (长城山庄, Changcheng shanzhuang) is sitting at the foot of the Great Wall. Ancient style architecture and elegant court, the villa is perfect for enjoying the fresh air and scenery of the Great Wall. Finally, the Master Fish Restaurant (鱼师傅餐厅, Yu shifu canting) will know how to fill your appetite after a half day hike on this section of the Great Wall.