The First Bend of Yellow River

Brief Introduction to The First Bend of Yellow River
As the second longest river in China, Yellow River is the other one as important as the famous Yangtze River. It is the main birthplace of Chinese nation, and is affectionately called the Mother River of China. When it runs eastward into the Bohai Sea through Gansu and Sichuan provinces, the mother river converges with a smaller White River in Tangke Township, forming a giant S-shape and the magnificent First Bend of Yellow River, which becomes part of the natural boundary between the aforementioned provinces, with Gansu on its west side and Sichuan on the east.

Being the most representative scenic spot on the Yellow River grassland, The First Bend of Yellow River reveals the feminine beauty of the river with its mildness. It parallels with the masculine beauty of Hukou Waterfall, which is the second largest waterfall in China (after the Huangguoshu Waterfall) and the other most beautiful natural scenery on the Yellow River, well interpreted Tai Chi yin-yang theory in Chinese culture, just like its S-shape tells. 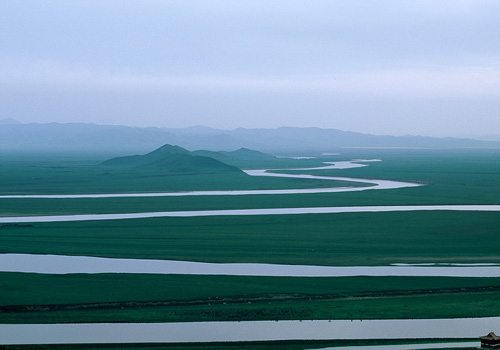 The First Bend of Yellow River – A Picturesque Place You Cannot Miss
Climb to a hill or the viewing platform, you can have an overlook of The First Bend of Yellow River. You can see the second longest river of China unhurriedly come and then wind away with the water collected from White River. Seen from afar, it is like a hada (a piece of silk used as a greeting gift among the Tibetan and Mongol nationalities), a jade belt, or a fairy’s ribbon left on earth.

Water continuously washes the land, day by day there are many amazing islands formed in the area. Covered with rose willows, these islands become the paradise of golden pheasants, ruddy shelducks, hares, red-crowned cranes, black-necked cranes and other wild animals. Waterfowls gather on the islands and fishing boats shuttle to and fro among them, along with the Yellow River which shares a scenic hue with the blue sky, the scenic area is called “Solemn Vision in the Universe” by Chinese and foreign scientists. Accompanying the Yellow River and the endless grassland with wild flowers are ancient temples, clusters of tents, wisps of smoke, herds of cattle and sheep, etc. it is really a picturesque place worth a visit. 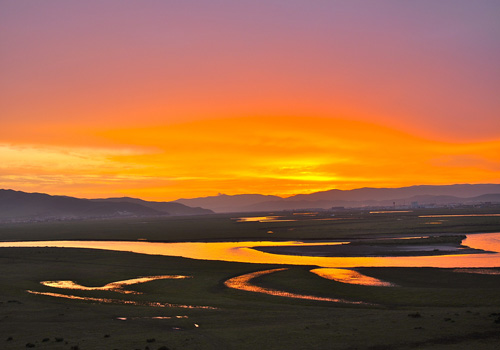